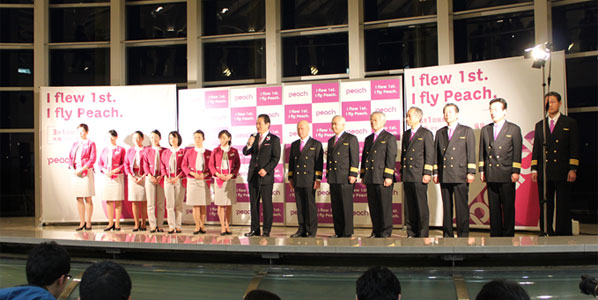 On 1 March, Peach became the first of a new wave of Japanese-based low-cost airlines to start operations when it launched flights from Osaka Kansai airport to Fukuoka (FUK) and Sapporo (CTS) using two 180-seat A320s. The airline is a joint venture between Japan’s All Nippon Airways (ANA), the Innovation Network Corporation of Japan, and Hong Kong’s First Eastern Investment Group and plans to grow its fleet to 10 aircraft by early 2013. 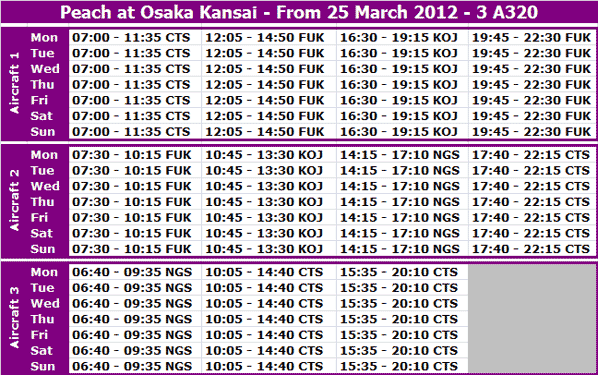 From 25 March, a third destinations, Nagasaki (NGS), will be operated twice daily, followed on 1 April by double-daily flights to Kagoshima (KOJ). This will, not surprisingly, require a third aircraft and some rescheduling of the existing services. All three aircraft will have left Osaka Kansai by 07:30 and two of them will operate four return flights each day before returning after 22:00 in the evening. Turnround times in Kansai have now been reduced to as short as 30 minutes for five of the eight turnrounds the aircraft will have to perform during a typical day. Peach will initially serve Osaka-Sapporo and Fukuoka – its new A230s mean these routes are served by a bewildering seven different aircraft types! Nagasaki and Kagoshima will be added by April 1.

The Osaka, Kyoto, Kobe region of Japan is served by three airports. The oldest is Itami, which opened in 1939 and is surrounded by urban development. In 1994, Kansai International Airport, built on reclaimed land in Osaka Bay around 40 kilometres from downtown Osaka, was opened to handle all international services, as well as domestic flights. In its last financial year, the airport handled just over 14 million passengers, of which only just over one-quarter were on domestic flights. Kobe Airport is another airport built on a man-made island which opened in 2006. There is a high-speed ferry that links the two off-shore airports of Kansai and Kobe airports in 30 minutes.

A look at schedule data for April reveals that the two routes (Osaka – Sapporo and Osaka – Fukuoka) are served by a surprisingly wide range of aircraft types. Peach uses just A320s and Skymark operates just 737s, but ANA operates 777s, 767s, 737s and Q400s, while arch-rival Japan Air Lines (JAL) operates 767s, 737s, E170s and CRJs. The following table summarises the number of daily flights operated by each airline with each aircraft type on the airport-pairs involved.