Australian domestic air traffic up less than 1% in 2011; but Tiger bites back with new Sydney base Domestic air travel in Australia was impacted by a number of events in 2011. An ash cloud from a Chilean volcano in June, the temporary grounding of Tiger Airways in July (followed by its slow rebirth), and industrial action by staff at Qantas in October, all conspired to depress demand in 2011. Despite this, passenger numbers were up 0.6% to 54.3 million, while RPKs (Revenue Passenger Kilometres) grew by 2.3%. Average load factor remained virtually unchanged at 79%. 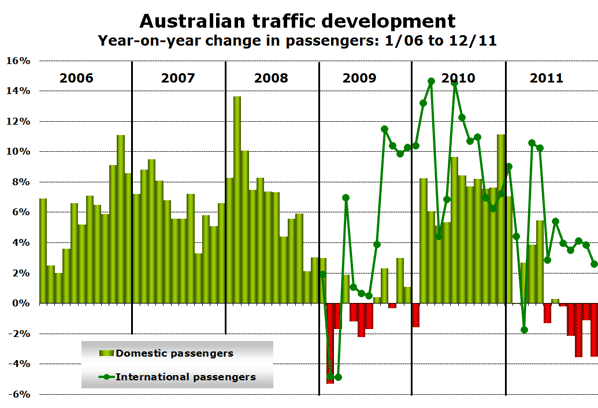 International traffic up 5%; Qantas group has 26% of market

International traffic had a better year with passenger numbers up 5% to 28.1 million. Qantas continued to be the leading airline for international services with 18.2% of the market, followed by Singapore Airlines (9.0%), Air New Zealand (8.3%), Emirates (7.9%), Jetstar (7.8%) and Virgin Australia (6.7%). Air Australia (previously known as Strategic Air) ceased operations in mid-February. In December the airline accounted for 0.6% of international passengers travelling to and from Australia.

Four routes to Singapore and three to Auckland appear in the top 10 of international city-pairs with one appearance each for Denpasar, Hong Kong and Los Angeles. The top three city-pairs have remained unchanged but Perth – Singapore has jumped from sixth for fourth in 2011. New international services starting at the end of March include AirAsia X launching daily flights from Kuala Lumpur to Sydney, and a new thrice-weekly Qantas service from Sydney to Santiago (Chile), which replaces the airline’s service to Buenos Aires.