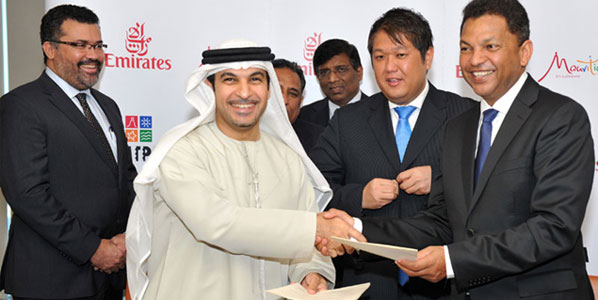 January 2012: As Air Mauritius cuts back some routes and expands others, the Mauritius Ministry of Tourism decides to sign a major strategic partnership with Emirates to bring traffic via Dubai on its 11-weekly services. “We’re confident we’ll see the results in a very short span of time”, says Emirates’ Majid Al Mualla, SVP Commercial Operations West Asia and Indian Ocean.

A combined 2.67 million passengers have been handled at Mauritius’ two airports in 2011, which not only is an improvement of 3% on the year before, but also sets a new yearly high for the island country. Although this increase is significantly slower than the 9% growth the year before, it does mark the country’s lasting return to the upward trend that was interrupted by a 9% drop in 2009. 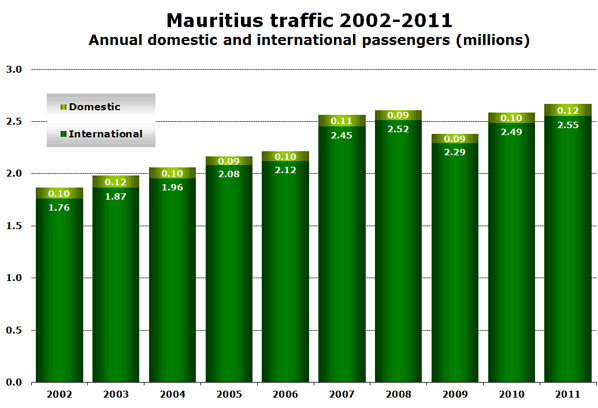 While Sir Seewoosagur Ramgoolam International Airport, more commonly known as Mauritius Airport, has a monopoly over international routes, it shares domestic traffic with the country’s second facility; Sir Gaëtan Duval Airport that serves the island of Rodrigues. In 2011, just over 116,000 passengers used the inter-island link offered by Air Mauritius. The flag carrier remains the only airline to offer any kind of scheduled service, domestic or otherwise, to Rodrigues. In fact, the only time it faced competition on the route was between 2005 and 2007 – dates that also mark the rise and fall of Catovair. Due to the relatively restrictive aviation policy in Mauritius, this situation is not likely to change in the near future.

Nearby Reunion Island is the largest international market served out of Mauritius. Two destinations, St Denis and St Pierre, are served with a total of 80 weekly frequencies by both Air Mauritius and its competitor Air Austral. Air Mauritius provides 53% of capacity in the market. 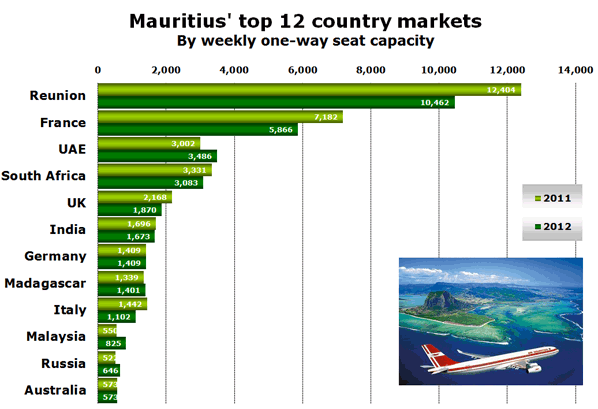 While the two airlines have competed indirectly in a number of markets, the race may soon intensify as both look to make the most out of their shared catchment. Air Mauritius, which has reported another year of losses in 2011, will see its network shrink considerably in 2012, as the airline cuts several long haul services. Most recently, the airline announced that it intends to drop two Australian destinations (Melbourne via Sydney), concentrating on Perth from May 2012. Air Austral was, however, quick to react and will be offering services to Sydney from Reunion.

While France saw capacity reduction in excess of 18% last year, it remains not only the second-largest international, but also the biggest long-haul country market. Paris CDG is served by both Air Mauritius and Air France, which provide seven and six weekly frequencies respectively, while Corsair operates a further two weekly flights to Paris Orly. Both Air France and Corsair serve the route using 747s, while Air Mauritius operates it with an A340-300. Two other European markets have seen traffic reduction, including Italy (down by 24%) and the UK (down by 14%), while Germany remained unchanged, but will become the only EU country to see Mauritius capacity grow, as Condor doubles capacity in summer 2012.

While Air Mauritius remains the largest carrier serving international routes in 2011, the flag carrier is set to see its market share diminish as it cuts a number of routes this year, including Munich in February, Geneva in March, Sydney/Melbourne in May, as well as Frankfurt, Bangalore and Durban in October.

Emirates has served Mauritius since late 2002 and has considerably grown its presence ever since. In 2011, Emirates provided 12% more capacity on its Dubai service, which accounted for 16% of all traffic, becoming the third most popular market last year.

In 2012, only two new routes have so far been announced, both by Air Mauritius. This follows two short-lived routes launched by the airline in 2011 as well as British Airways’ new London Gatwick service. However, the London route was merely moved from London Heathrow.