Just over four years ago, in February 2008, Norwegian grasped the opportunity presented by the opening of a new passenger terminal at Oslo Rygge airport (previously it had been exclusively used by the Norwegian Air Force) to start scheduled services to a wide range of destinations. The airport, located around 70 kilometres from downtown Oslo is still used by the military. In October 2009 Ryanair first started flights to the airport and in March 2010 it made the airport its 37th base. This summer it will serve 39 destinations from Rygge. Meanwhile Norwegian ended international flights from Rygge at the end of last October, and closed its last two remaining domestic services to Bergen and Trondheim at the beginning of 2012. This leaves Ryanair and Danish Air Transport (which operates three domestic routes) as the only carriers operating scheduled services at Rygge this summer.

Last week saw Norwegian launch domestic flights from Oslo Torp airport (some 120 kilometres from downtown Oslo) to both Bergen and Trondheim, signalling a shift in its strategy regarding Oslo’s secondary airports. It has been operating a weekly Alicante service from Torp since November 2010 and started weekly Malaga flights last November. Apart from the two domestic routes which it will operate twice daily on weekdays, Norwegian also plans to start international flights to Antalya, Berlin, Gran Canaria, Nice and Palma this summer, as well as an additional domestic route to Harstad/Narvik. Other carriers operating at Torp this summer include KLM, Ryanair, Widerøe and Wizz Air. 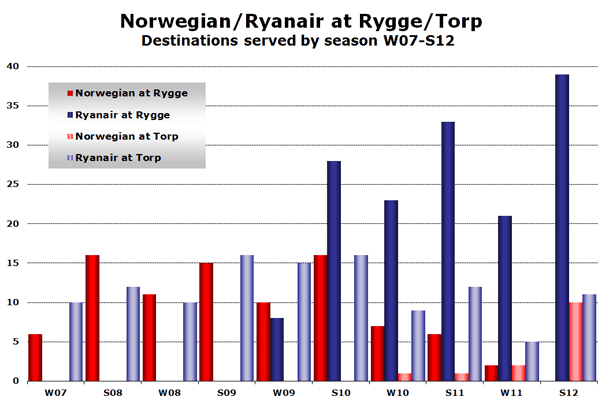 This summer will see a total of 60 services being operated by Norwegian and Ryanair when combining the Rygge and Torp networks, equalling the figure from summer 2010. However, Norwegian is only responsible for 10 of them while Ryanair accounts for 50; 39 at Rygge and 11 at Torp. However, it is worth remembering that Ryanair does not serve Oslo’s main Gardermoen airport (which is itself some 50 kilometres from downtown Oslo) while Norwegian’s base there will this summer offer non-stop flights to over 80 destinations.

In 2011 Rygge airport handled 1.67 million passengers, up 17% on its 2010 figures, while Torp handled 1.35 million passengers, down 15% on the previous year. If traffic at both Rygge and Torp is combined the total figure was virtually unchanged with just over three million passengers in both 2010 and 2011. Meanwhile Oslo’s main airport at Gardermoen saw passenger demand rise by almost 11% to 21.1 million in 2011.