Alitalia plans small increase in international capacity from Rome, but 5% cut in domestic capacity this summer 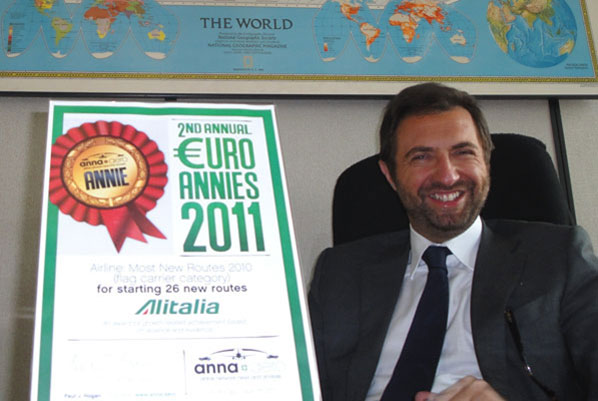 All great network planners should have a World Map on the wall. Alitalia's EVP Marketing RM & Network, Andrea Stolfa, goes one better and has a great big anna.aero EURO ANNIE Prize on his desk too. Recent rationalisations mean Alitalia’s international capacity growth at Rome is a modest 1%; new routes this summer include Rome to Georgia, Riyadh, and Benghazi.

As the privatised Alitalia continues to edge closer to financial health anna.aero this week takes a detailed look at the airline’s network from its main base at Rome Fiumicino airport, and what changes have been made since last year. Comparing the first weeks of June in 2012 and 2011 reveals that according to OAG schedule data Alitalia intends to cut weekly seat capacity by around 3% in Rome. Domestic routes (which account for around 55% of the carrier’s seat capacity at the airport) will see a 5% reduction, while international capacity will be increased by just under 1%. 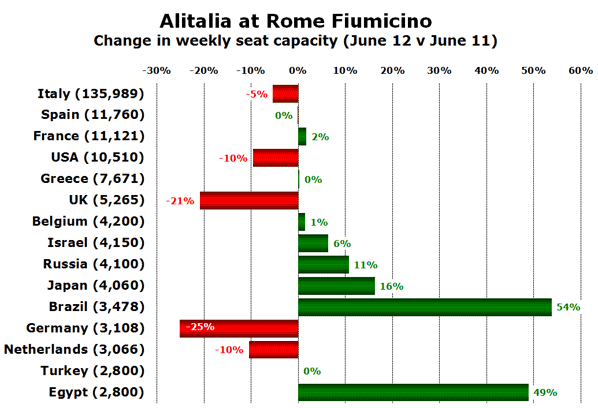 Among the leading country markets there is significant (but slightly misleading) growth to Brazil as Alitalia only launched its Rio de Janeiro route during the week being analysed in 2011. Egypt’s almost 50% increase in capacity is down to a planned increase in weekly flights from 10 to 14, along with a move to using slightly larger aircraft.

Among the countries seeing a reduction in capacity, four of Alitalia’s six US destinations see weekly flights reduced by one, while the UK market (consisting of just London Heathrow) sees a 20% reduction in capacity as a result of frequencies being cut from five per day to four per day. The 25% reduction in German capacity is because of a downsizing of the aircraft used on the double-daily Munich service. Frequencies remain unchanged with two daily flights to Frankfurt and two to Munich.

Tbilisi and Riyadh launches pushed back to July

Alitalia’s plans to launch new services from Rome to Georgia (Tbilisi) in May and Saudi Arabia (Riyadh) in June, have been delayed slightly. Both routes are now scheduled to begin operating from the start of July. However, the airline’s new service to Benghazi in Libya appears to be on track to start at the beginning of June.