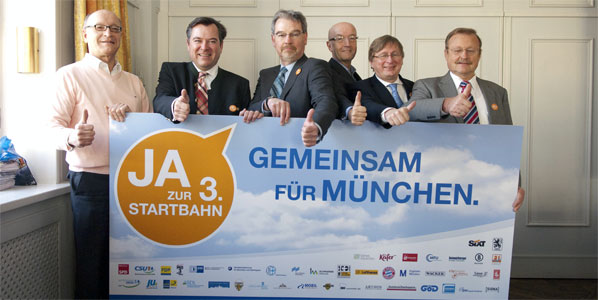 Last year, passenger numbers at Munich Airport grew by an impressive 8.8% to 37.8 million (despite the introduction at the beginning of the year of the government’s so-called ‘eco-tax’), enabling it to overtake Rome Fiumicino as Europe’s 6th busiest airport. However, it seems likely that the Bavarian airport will slip back to seventh in 2012 as Istanbul’s Atatürk airport was busier than Munich in the second half of 2011.

With Munich now firmly established as Lufthansa’s second hub, the German flag-carrier accounts for over 60% of scheduled seat capacity and 65% of all scheduled flights at the airport. With subsidiaries Austrian, germanwings and Swiss accounting for a further 3% of capacity, Lufthansa’s dominance at the airport is clear.

A third runway has been proposed for the airport and last week, a variety of supporters from across the political and business spectrum got together to promote the benefits of an additional runway. A decision is due in June as to whether the airport can proceed with its plans. 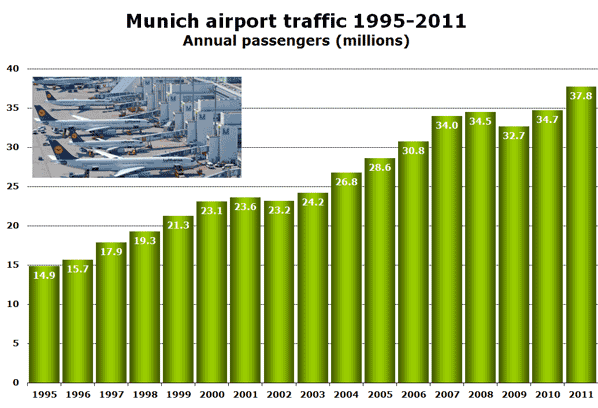 airberlin is the second-busiest carrier at the airport with around 9% of seat capacity, competing with Lufthansa on several domestic routes, as well as offering a range of leisure destinations. germanwings and Condor each account for less than 2% of scheduled seat capacity while the busiest non-German airline serving Munich is easyJet with just 1.5% of seat capacity, spread across routes to four destinations in the UK; Edinburgh, London Gatwick, London Stansted and Manchester.

Based on analysis of OAG schedule data, it would appear that scheduled capacity at Munich airport this summer is relatively unchanged from last year. A snapshot comparison of seat capacity by country market for the first week of June in 2012 compared with the first week of June 2011 shows that half of the top 15 are showing a year-on-year decline in capacity, while half are showing growth. 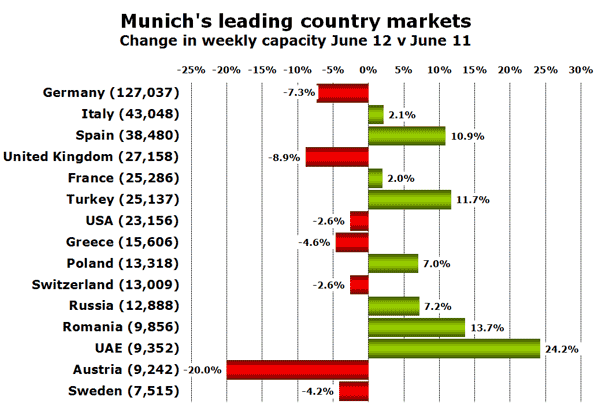 Capacity reductions of more than 5% appear to be occurring in the domestic market as well as on routes to Austria and the UK. However, six of the top 15 country markets are registering capacity growth of more than 5% with UAE (+24%), Romania (+14%) and Turkey (+12%) leading the way. The capacity growth in the UAE market has been achieved by Emirates choosing to operate an A380 on one of its two daily frequencies.

This week saw Sun-Air (operating as British Airways) start flights from Billund in Denmark, replacing Cimber Sterling that recently withdrew from the route. The start of the summer season at the end of March will see new daily flights to Milan Malpensa operated by Air One, and Barcelona operated by Vueling. There will also be new weekly flights to Montpellier and Valencia operated by Lufthansa, and Heraklion operated by Aegean Airlines.

During May and June, Lufthansa will also add weekly flights to Bastia (France), Jersey (UK), Odessa (Ukraine) and Pula (Croatia). From the start of the winter season (at the end of October), Lufthansa is still planning to launch daily flights to Mexico City using A340-600s.