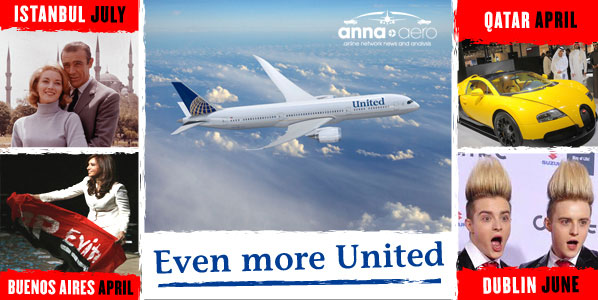 United’s greater internationalism: Three non-US airports now make United’s top 12 with Tokyo Narita ahead of both London Heathrow and Frankfurt. Indeed Narita is something of a United mini-hub, served from eight US airports with onward flights to six Asian cities. (Manchester also gets a daily service from Washington on May 1; but this was not funny enough to add to the image.)

The recent integration of their reservation systems means that as far as customers are concerned the merger between Continental and United is now complete. This also means that all schedule data in GDS’s is now listed solely under United with the Continental brand name consigned to history along with the likes of America West, Eastern, Northwest, Pan-Am and TWA. This week anna.aero takes a look at some of the key features of the ‘new’ United’s network. 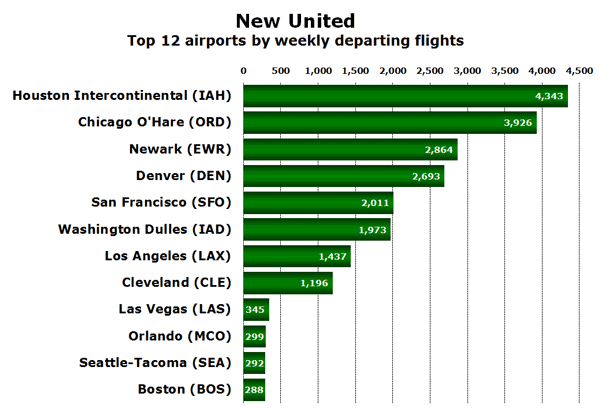 The enlarged airline has eight major operating bases as measured in terms of weekly departing flights, with Houston George Bush Intercontinental Airport and Chicago O’Hare significantly larger than the rest. At present the airline flies to 385 airports worldwide. An analysis of the leading airports in terms of weekly seat capacity shows exactly the same top 12 airports.

Taking into account distance flown a look at United’s leading airports in terms of weekly ASKs (Available Seat Kilometres) reveals that Newark is now the airline’s leading airport, followed by Houston and Chicago. 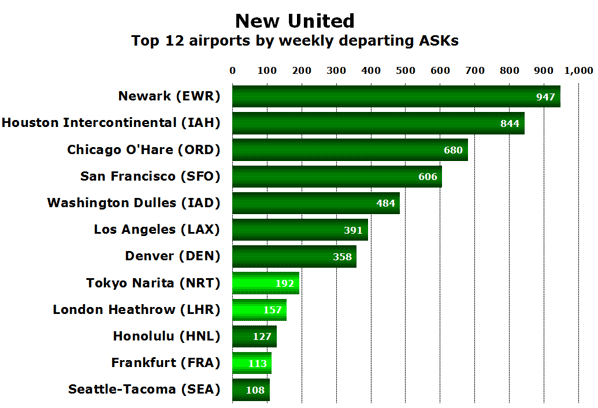 Three non-US airports (shown in light green) now make the top 12 with Tokyo Narita (eighth) beating London Heathrow (ninth) and Frankfurt (11th). Cleveland no longer features in the top 12. While London Heathrow is purely served from six US airports with between one and five daily flights, Tokyo Narita is a mini-hub for United, served from eight US airports but with onward flights to Bangkok, Guam, Hong Kong, Seoul, Singapore and Taipei.

Analysis of the leading non-stop routes by ASKs reveals that United’s flights from Chicago O’Hare, Washington Dulles and Newark to San Francisco lead the way, closely followed by the leading international route; the five times daily service between Newark and London Heathrow. 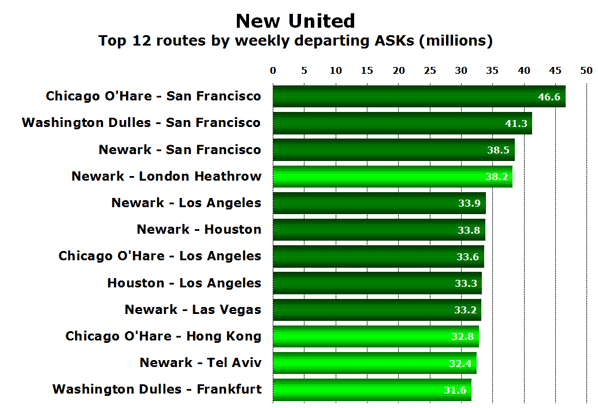 United currently operates 978 non-stop routes of which the smallest (in terms of ASKs) is the twice-weekly flight between Guam and Rota (Northern Mariana Islands) which are only 90 kilometres apart in the South Pacific, and which is served by Cape Air’s 46-seat ATR 42s, operating on behalf of United Express.

The imminent start of the 2012 summer season will see United add a number of significant new routes, summarised in the following table.