On 26 January 2012, Gilberto Lopez, travelling from Monterrey to Culiacan, was selected as the Mexican LCC vivaaerobus’s 10-millionth passenger, winning 10 free flights. Monterrey is still the low-cost airline’s largest base, but its Mexico City operations are growing so fast that the capital city airport soon may carry more passengers on the airline.

On 26 January 2012, Gilberto Lopez, travelling from Monterrey to Culiacan, was selected as the Mexican LCC vivaaerobus’s 10-millionth passenger. His prize was a bottle of champagne and 10 free flights with the airline. Last year, the airline carried 2.94 million passengers in the Mexican domestic market (up 35% on 2010) at an average estimated load factor of around 72%, giving it an 11.5% share of the market. In addition, vivaaerobus carried 76,000 passengers on international flights. The airline currently operates 17 737-300s, all of which are configured with 148 seats.

This week has seen the airline start two new routes. From its growing base at Mexico City, it is now offering three weekly flights to Reynosa, while from Cancun it has begun twice-weekly services to Villahermosa. Its total network now comprises over 50 routes, including a handful of international services. 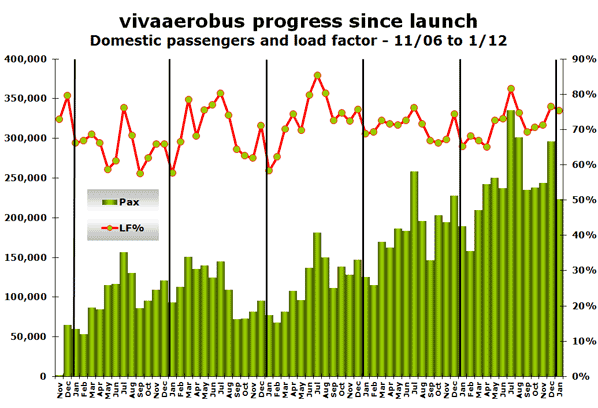 vivaaerobus’ main base at Monterrey is Mexico’s fourth busiest airport handling 5.6 million passengers in 2011 (up 4% on 2010). Its other main bases are at Mexico City and Guadalajara. In recent seasons, it has built up its network from Mexico City so that it may soon become the airline’s busiest airport in terms of passenger numbers.

International flights to the US began in May 2008 to Austin, Texas from both Monterrey and Cancun. In January 2009, Puerto Vallarta was added to the Austin network. However, the swine flu epidemic in May 2009 put paid to all three of these routes. Since then, other US routes have been launched from Monterrey to Las Vegas (July 2009), Hermosillo to Las Vegas (March 2010) and Monterrey to Houston (July 2010). The Hermosillo – Las Vegas route was dropped quite quickly but at the end of last year four new international routes from Monterrey were started to Chicago Midway, Miami, Orlando and San Antonio. As a result, in December 2011 vivaaerobus carried almost 15,000 passengers on international flights, representing almost 5% of the airline’s total passengers that month. However, the Chicago route will be suspended from 13 April, leaving just five US route from Monterrey.