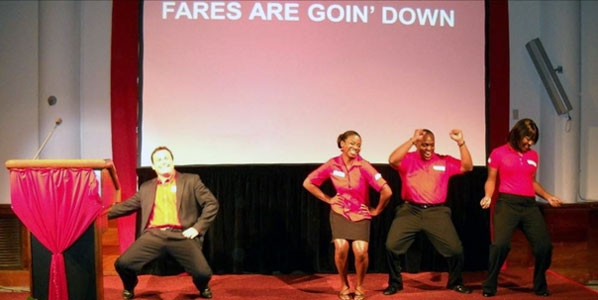 Not at the moment: Although new services to St Maarten and St Lucia were announced by REDjet’s president Robbie Burns as recently as in the last two weeks, the low-cost airline suddenly demised last week. Dancing now instead are the flag carriers, celebrating that the “red trouble” is no more, but will REDjet be able to bite into government funds and relaunch operations?

Barbados-based budget carrier REDjet indefinitely suspended operations on 16 March, 10 months after launching its first route from Bridgeport, Barbados to Georgetown in Guyana. In spite of regulatory constraints that delayed some of its planned route launches, REDjet managed to enter a range of Caribbean markets, including Antigua, Jamaica, St Lucia, St Maarten and Trinidad in a relatively short period of time. The airline, which branded itself as the region’s first low-cost airline, operated a small fleet comprised of three ex-American Airlines MD-80s. One further aircraft of the same type was about to join the fleet at the time the airline suspended operations.

The following table summarises the airline’s routes as launched and planned to launch.

anna.aero offered wide coverage of REDjet’s arrival, which caused a stir in the English-speaking part of the Caribbean last year. The region is notorious for its protectionism towards flag carriers and has seen a number of state-backed airlines collapse and reincarnate. Notably so Trinidad’s BWIA; bailed by the government in 2006, it was later rebranded as Caribbean Airlines, then merged with Air Jamaica and became REDjet’s main opponent. Besides competition from Caribbean Airlines on five routes, REDjet also faced pan-Caribbean LIAT in the Barbados to Trinidad market. A total of seven routes were served by REDjet at the time of closure, with services to St Maarten and St Lucia announced to begin later this year.

In the service suspension notice published on its website last Friday, REDjet voiced its disappointment with the business climate in the Caribbean: “We have seen other carriers drastically cut their fares in an effort to shut down REDjet and return to high fares and business as usual. Unlike us, they do not have to be profitable to stay in business.” The airline also announced that it would now aim at receiving its own share of state aid in an attempt at restoring operations.