Air Canada stronger in the US and the Caribbean; 64% of trans-border capacity out of Toronto In a curious twist of fate, the back-to-work legislation, which was introduced by the Canadian government last week, will let even more people to get away from it all, as the carrier adds more destinations in the Caribbean.

A great deal has changed at Air Canada since anna.aero last analysed the airline in December 2009. 59 airports across Canada are currently served by the airline, and this number takes account of Air Canada Express. This recently created brand includes domestic services by four regional airlines, and replaces the previous Air Canada Jazz and Air Canada Connector. As a result of these changes, a total of 379 aircraft (Air Canada 209, Air Canada Express 179) currently operate under the Air Canada banner, up from 335 in 2009. 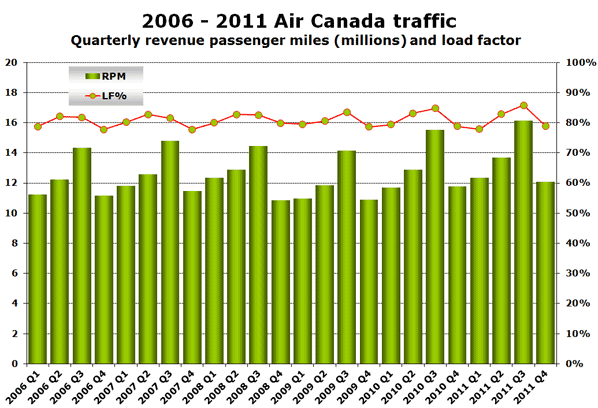 In 2011, Air Canada system traffic maintained its growth as measured in RPMs; however, at 4.5% it was not as dynamic as the year before, when the year-on-year change equalled 8.3%. Expressed in ASMs, system capacity grew by 4.7% over the same period. Historically, Air Canada’s traffic levels have been at their best in the third quarter, when the airline also attains the highest load factors. This trend continued in 2011, although, if averaged for the entire year, the load factors have marginally decreased.

Capacity growth in 2011 focused on Pacific and Latin markets, whereby slightly more than 7% ASMs were added in each of the two. Strong demand for flights to Central and South America helped the region to become the second most dynamically growing market for the airline after US trans-border segment. The latter expanded by 9.8% in terms of traffic, while simultaneous capacity growth stood at 6.7% as compared to 2010 results.

More than twice as many flights are operated by Air Canada from Toronto Pearson, than from the second-largest airport, Montreal. Trans-border traffic is the most concentrated, with 64% of all US flights originating in Toronto, while the city’s dominant position is less straightforward across other regions; although at 55%, it still handles more than a half of weekly non-domestic and non-US destinations. Toronto has also the most nonstop destinations served by the airline out of all airports, ahead of Montreal where flights to 38 cities are on offer. Air Canada operates services to the US only from six out of 59 airports it serves, while further three enjoy international links. 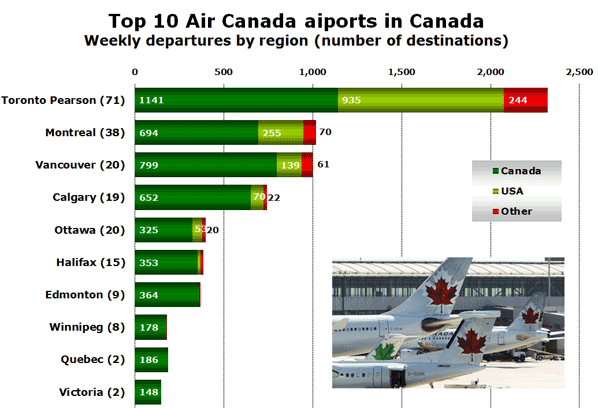 A total of seven new routes were launched by Air Canada last year, including a link between Toronto City and Montreal, where the airline attempts to take on the incumbent Porter Airlines. Other new launches involved a number of destinations across the Caribbean, which are served on a seasonal basis. So far in 2012, only a seasonal service from Halifax to Providenciales in Turks and Caicos Islands has been launched. The only other route announced to date is the Toronto Pearson to New York JFK service, which will be offered thrice-daily beginning on 3 May.