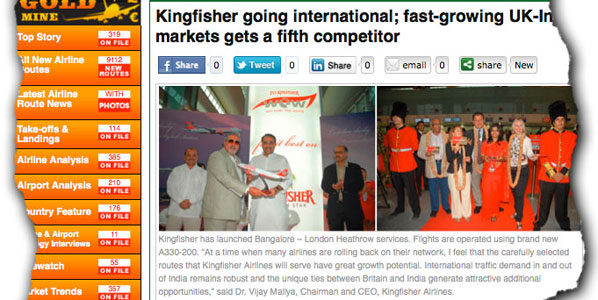 The last couple of weeks have seen some significant developments for passengers wanting to travel non-stop between the UK and India. As part of its attempts to deal with a worrying financial situation, Kingfisher Airlines has decided to suspend its Delhi – London Heathrow service (the last date for which the route is currently on sale is 10 April) while its Mumbai – Heathrow service has already stopped operating. Coincidentally (or not), within days of this decision, Virgin Atlantic announced that it would be resuming service on the London Heathrow – Mumbai route from the end of October when it would be using one of its new A330-300s. Virgin abandoned the route in May 2009 when it was competing head-to-head with Air India, British Airways, Jet Airways and Kingfisher.

Between 2004 and 2006, the UK-India passenger market more than doubled from under 1.1 million to over 2.3 million thanks to a more liberal bilateral agreement enabling more services to be offered. Since 2006, the annual market has hovered around the 2.4 to 2.5 million mark. 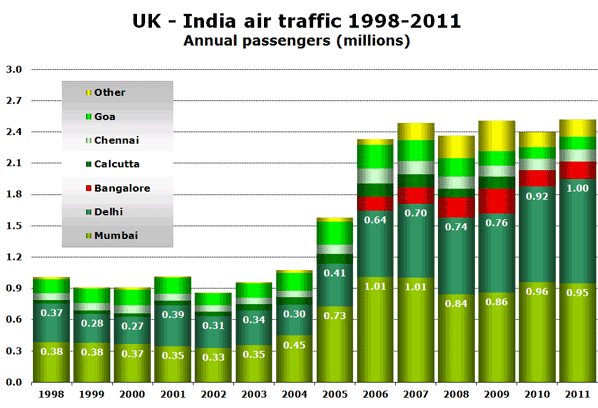 The Goa market is served mostly from London Gatwick and Manchester by charter carriers.

Kingfisher’s first UK route (and first ever international service) was from Bangalore to Heathrow, which launched on 3 September 2008 but was dropped just over a year later on 15 September 2009. Its Mumbai service started in January 2009, with the Delhi service starting at the end of March 2010. Another airline to have served the Mumbai market is bmi British Midland, which operated daily flights in 2006. bmi still has a presence in India thanks to its three weekly flights to Amritsar that operate via Almaty in Kazakhstan.