anna.aero was shown around the brand-new terminal in Da Nang by Truong Thi Thu Trang from Vietnam Airlines’ Operating Control Centre. The airport has experienced annual growth of 20% in the last few years, so the new terminal’s capacity of four million annual passengers allows the airport to accommodate the area’s continued booming tourism.

Da Nang on central Vietnam’s coast is experiencing booming tourism developments. Already the gateway to the World Heritage Site cities Hoi An and Hue, Da Nang sees 27 high-end resorts either already completed or being built along its 30-kilometre China Beach. Da Nang is also emerging as a Vietnamese sports centre with several new arenas built in the last few years, alongside two celebrity-designed championship golf courses; one by Greg Norman and one by Colin Montgomery.

The most recent passenger figures publicly released by the airport operator Middle Airports Corporation are for 2009, showing that Da Nang International Airport served two million passengers; a figure that had grown at a yearly average of 20% since 2005. This development roughly follows the growth of scheduled seats offered at the airport as reported by OAG, which suggests that Da Nang further grew by approximately 30% in 2010 and 15% in 2011. This means that the airport ought to have handled around three million passengers last year.

In order to cope with the growing demand, a brand-new, state-of-the-art terminal has been constructed with capacity for four million passengers. The terminal was opened for traffic on 15 December last year and the upgrade and extension of the second runway is now also nearly completed.

Domestic traffic still dominates at the airport, making up 91% of scheduled seat capacity. However, the composition of the domestic market is changing. Vietnam Airlines, which had a monopoly in the Da Nang market a decade ago, still dominates with an 81% share of the domestic seat capacity at the airport in May; however, the country’s two low-cost carriers share the remaining capacity with their presence on the key trunk route to Ho Chi Minh City. Jetstar Pacific is already operates the route, while newly launched VietJet Air will launch its Da Nang flights at the end of April. Anticipating the increased low-cost competition, the regional CRJ900 operator Air Mekong notably dropped its routes from Ho Chi Minh City and Hanoi in November last year. 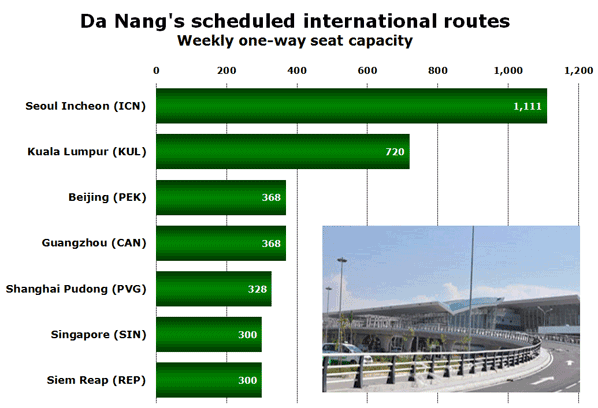 Meanwhile, the scheduled international market is expanding rapidly. South Korea is the biggest international market in Da Nang thanks to Seoul Incheon services on both Asiana and Korean Air. The two airlines notably just launched the route in December and January respectively. AirAsia is also a new operator, having launched its four weekly Kuala Lumpur services when the new terminal opened last December. The China market, which ranks as the second-largest scheduled international country market, is also experiencing growth at the moment. Beijing and Guangzhou routes will be launched by Vietnam Airlines this coming weekend, at the start of the summer scheduling season, while the Shanghai route has been served by Shanghai Airlines since last summer. The two casinos at the Crowne Plaza and Furama resorts particularly attract Chinese visitors to Da Nang as Macau decreases its influence as an Asian gambling capital.

SilkAir, Singapore Airlines’ regional subsidiary, has notably served Da Nang since 2005 – both non-stop from Singapore and via Siem Reap in Cambodia.

The table below summarises new routes launched or due to launch at Da Nang since last year.

We would like to thank Vietnam Airlines and Fusion Maia Resort for generously hosting anna.aero in Da Nang.