Tolmachevo Airport, which serves Russia’s third-largest city Novosibirsk, ranks as the sixth-largest airport in Russia after the three Moscow airports, St Petersburg and Yekaterinburg, and is the busiest in Siberia.

Except after the Russian financial crisis of 1998 and the global economic downturn in 2009, the airport has experienced healthy growth in the last 15 years with 2011 passenger numbers well over the double those of 1998. However, growth has been particularly strong after the most recent recession. Last year alone, international passengers in Novosibirsk grew by 45% and domestic figures were up by 13%, resulting in an overall growth of almost a quarter of the airport’s total passengers. 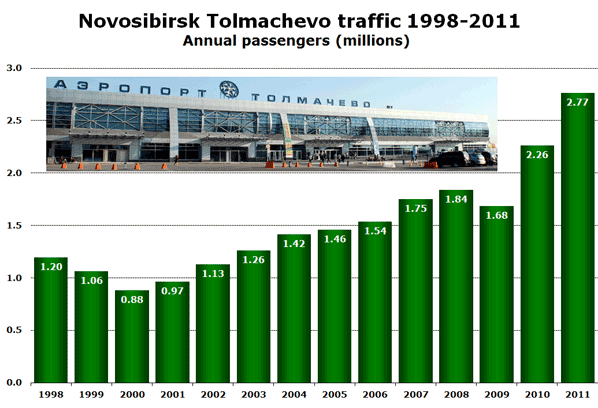 Growth continues this year. In January and February, total passengers were up by a third over the corresponding period last year. Again, it is international traffic that grows the fastest; +37% compared with 31% growth in the domestically.

64% of the airport’s passengers travel on domestic services, with the remaining 36% contributed by international travel. Among the top four domestic destinations are routes to the three Moscow airports Domodedovo, Sheremetyevo and Vnukovo. The combined seat capacity to these airports make up more than half of Novosibirsk’s domestic seat capacity. The third-busiest route is notably to Khabarovsk in the Russian Far East, which ranks ahead of operations to both Moscow Vnukovo and St Petersburg. 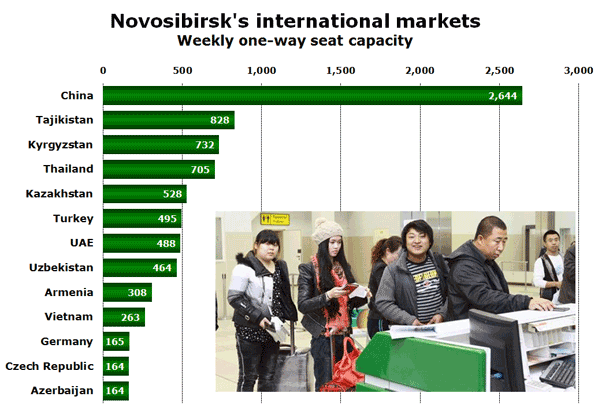 Novosibirsk’s location on the path between European Russia and China makes the booming Chinese market by far the airport’s largest international scheduled market. With the introduction of Turkish Airlines’ new route from Istanbul Atatürk last week, Turkey is the largest European market, followed by Germany and the Czech Republic through each weekly operations on S7 to Frankfurt and Prague. In the summer high season, frequencies on these two routes increase and S7 then also serves Hannover in Germany. In addition to scheduled operations, there are a number of charter routes operated to Asian, European and Egyptian leisure destinations from Novosibirsk. 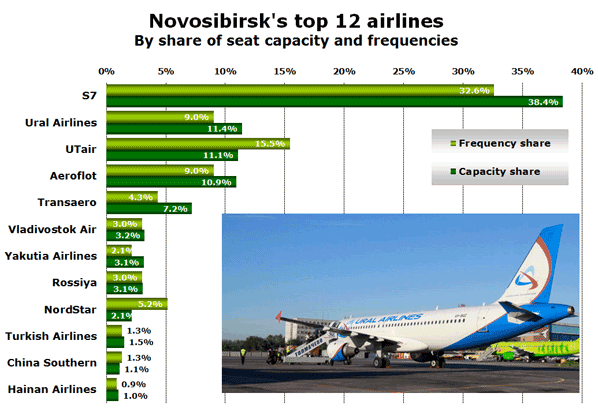 The locally based oneworld member S7 is the largest airline at Tolmachevo Airport, followed by Ural Airlines and UTair. The national carrier Aeroflot only ranks fourth at the airport, ahead of Transaero.

Turkish Airlines has instantly become the biggest foreign airline, ranking marginally ahead of China Southern and Hainan Airlines in the top 12. Notably, no airline from Central Asia makes the top list, in spite of these country markets ranking high at the airport, suggesting that local Russian carriers dominate traffic to these countries.

Last year, anna.aero reported on seven new routes being launched to and from Novosibirsk, of which only one was operated with frequencies exceeding two weekly services; AeroSvit’s five weekly seasonal flights from Kiev Borispol. In addition to Turkish Airlines’ new route, five further routes have been announced and made it into the database, as detailed in the extract below, which shows that low-frequency services continue to dominate the airport’s new route launches.