anna.aero’s Hanoi CEO meeting: Vietnam Airlines’ Pham Ngoc Minh (right) told Andreas Akerman (left) how the fast-growing airline’s current network expansion priority is in the regional market. “The Greater China market is strong, showing real demand for our region.” With the construction of a new airport in Ho Chi Minh City, hopes are raised that it will emerge as a key hub for South East Asia.

Invited by Vietnam Airlines, anna.aero travelled to the airline’s Hanoi headquarters to meet with the president and CEO Dr Pham Ngoc Minh to find out about the airline’s ambitions growth plans, both within its core Indochina home market, where it aims to be the market leader, and beyond.

In 2011, Vietnam Airlines’ RPKs rose by 10%, while revenue was up by 24-25%, Minh explained. But he sees no end to the expansion, revealing that the airline’s growth plans include overtaking both Garuda Indonesia and Malaysia Airlines in size by 2015. By 2020, the airline’s aim is to be South East Asia’s second-largest airline after Singapore Airlines, having then also overtaken Thai Airways International. At that point, Vietnam Airlines’ fleet will consist of a staggering 170 aircraft compared with the current 73, according to the airline’s director of planning Nguyen Thi Thanh Van. The rapid expansion will partly be funded through an IPO, for which Minh said the target currently is the second half of next year.

In Europe, Minh said that the airline is currently looking at one further destination, highlighting Berlin as a potential candidate. Notably, Berlin not only strengthens its hub status with the completion of the new Berlin Brandenburg Airport later this year, but the German capital boasts a large Vietnamese population and was the German destination served by Vietnam Airlines during a part of the 1990s. However, in 2004, the two German routes launched by the airline were instead to Frankfurt. Minh also mentioned Amsterdam and Milan as potential future European destinations. Previously, the US west coast has also been mentioned as a future key long-haul market for Vietnam Airlines.

The London Gatwick routes that were launched in December last year, are currently offered with low frequencies; each twice-weekly from Hanoi and Ho Chi Minh City. Minh admitted that the load factors so far have been low on the routes; about 60% compared with the airline’s long haul average of 80-82%. However, he stated that the airline was aware of the economic situation in Europe and the fierce competition in the London market when the routes were launched. The airline’s policy is not to cut routes due to the economic crisis. When the market recovers, maybe next year, Vietnam Airlines will instead consider increasing frequencies.

Even though the Vietnamese government last month had Vietnam Airlines take over the state-owned 70% share of the low-cost airline Jetstar Pacific, of which Qantas holds the remaining 30%, Minh said that the two airlines will continue to be managed independently. There is a policy to develop the low-cost market in Vietnam, he explained. The low-cost model has “room for expansion. We see other legacy carriers in the region partnering with low-cost carriers.” He argues that the two airlines only partly compete with each other and said that the growth of low-cost traffic will not be stopped. Instead, they will strengthen the product, he argues.

Even before these events, the flag carrier had already planned to set up own low-cost operations through its subsidiary VASCO. These plans are now shelved and Vietnam Airlines is instead evaluating a future role for the ATR72 operator VASCO to develop as a regional commuter service in the next three to five years.

Another airline in which Vietnam Airlines is involved in the Cambodian national carrier Cambodia Angkor Air, of which it owns 49%. The airline’s current only international market is Vietnam, but Minh said that the airline plans to expand internationally, to Korea, China and other South East Asian countries already by the end of the year. Myanmar and Laos are specific country markets in the region highlighted by Minh.

Only latest technology aircraft as fleet grows in all segments 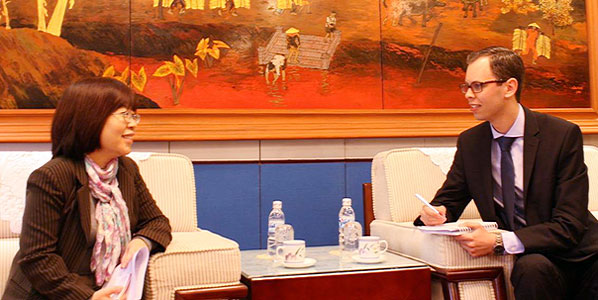 Nguyen Thi Thanh Van, Vietnam Airlines’ director of planning, told anna.aero how the airline’s fleet is planned to grow from current 73 aircraft to 170 in 2020. The new aircraft will let the airline grow into new markets such as the US, India and the Middle East.

Although both Airbus and Boeing can boast order books with Vietnam Airlines’ name next to its latest widebody aircraft, the airline is expanding its fleet in all size segments. According to Van, Vietnam Airlines will take 14 A350s, due to be delivered from 2014 but expected with a year’s delay, and 19 787-9s, also from 2015.

In the narrowbody segment, Vietnam Airlines’ fleet is already growing rapidly. An entire 26 further A321s are to be delivered to the airline in a period of time as short as before the end of 2014, but the growth will not stop then. Van revealed that the airline is assessing the new generation single aisle aircraft for further orders, but has yet to place any.

Vietnam Airlines is studying aircraft of other sizes as well. What is a requirement for the airline, according to both Minh and Van, is that the aircraft are of the latest technology. Van highlighted that any orders for the A380 are subject to airport infrastructure development in the country, not the least at the new airport in Ho Chi Minh City. As the airline nearly has phased out its Fokker 70s, it is also evaluating regional jets and Van mentioned the Mitsubishi Regional Jet, Sukhoi Superjet 100 and Bombardier CSeries as being evaluated, saying that CRJ aircraft and Embraer’s offerings are not considered due to not being new enough technology.

With the ambitious target of a fleet of 170 aircraft by 2020, many more aircraft orders and route launches can be expected from Vietnam Airlines as its market continues to boom.