Traditional Danish Kaj cakes were served as Billund in Denmark became a Ryanair base. Passengers on the first flight to Krakow were handed the celebratory cakes – based on a Danish cartoon but also an illustration of Irish leprechauns - by Legoman and a leprechaun along with Billund Airport’s Marketing Manager Jesper Klausholm and Ryanair’s Nordic Sales & Marketing Executive Elina Hakkarainen. 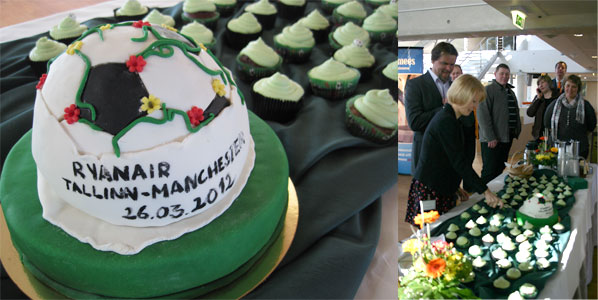 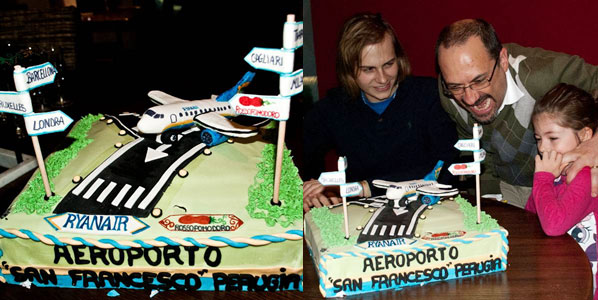 This cake was baked to celebrate Ryanair’s new services to Perugia in Umbria; ‘the Green Heart of Italy’. This week, flights have launched to Girona in Spain and in next week’s issue, we will report on the domestic service from Milan Bergamo. Eager to eat the cake is the airport director Piervittorio Farabbi (centre) along with his daughter (right) and Luca Siragusa, Ryanair’s Sales & Marketing Intern for Italy (left). Poland's Bydgoszcz Airport celebrated Ryanair's new route to Glasgow Prestwick with this substantial cake, which was served in the airport's departure hall. Including the Girona route, which also launched this week and will be reported on in next week's anna.aero, the Irish low-cost carrier now dominates the airport with six destinations. As much as we wanted, we did not manage to get in touch with the lady taking the picture of the cake to get hold of her presumably perfect shot of the cutting, so on this occasion photo credits go to Jarosław Pruss.