We have received a record 21 cakes in the Summer Season Part 1 Cake of The Week Competition. Get all your co-workers, family, friends and Twitter-followers to vote too. VOTE HERE. 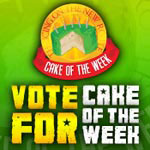 Last Sunday signalled the start of the so-called “summer season” for aviation, although for our readers in the southern hemisphere it is of course heading towards winter. Airlines, particularly those in Europe, are celebrating the start of milder, sunnier weather (especially in the UK) with the introduction of over 500 new routes in the next three weeks. With the Easter break (6-9 April) coming earlier than last year, Europe’s airlines in particular have been keen to tempt passengers with new routes and destinations.

anna.aero’s database of new services starting in the period 20 March to 8 April currently shows an impressive 526 new routes launching, with Ryanair alone accounting for over 150 of them, more than five times as many as the next airline, Vueling. Ryanair’s new routes include the opening of four new bases across Europe in Denmark (Billund), Germany (Karlsruhe-Baden), Poland (Wroclaw) and Spain (Palma de Mallorca). Europe’s second-biggest LCC, easyJet, is opening a base at London Southend Airport, while Vueling is expanding significantly at its main base in Barcelona.

A ranking of the leading airlines starting new services during this period is, not surprisingly dominated by European LCCs, with three European flag carriers (Air France, Estonian Air and Lufthansa) and two US legacy carriers (Delta and US Airways) thrown in for good measure. 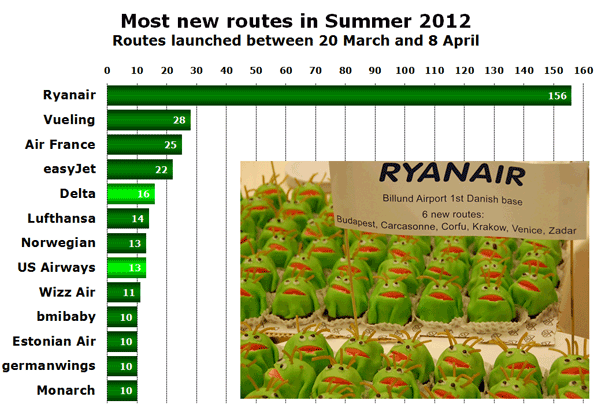 The appearance of Delta and US Airways is down to the airlines’ slot swap with Delta starting many new services from New York’s LaGuardia Airport while US Airways is growing its network from Washington Reagan Airport. Air France’s ranking is thanks to its on-going regional expansion in Marseille and its planned expansion in Toulouse.

Analysis of the 526 new routes by country reveals that of the 1052 airports involved in the new routes, 136 are in Spain, with France, the UK and Italy some way behind. The top 15 countries for new routes contain just four non-European countries (highlighted in bright green) led by the USA (thanks again to Delta and US Airways) and followed by China, Philippines and Japan. The 40 new routes involving Greek airports will come as good news to the Greek authorities who are hoping that in-bound tourism will play a significant role in reviving the country’s economic fortunes. 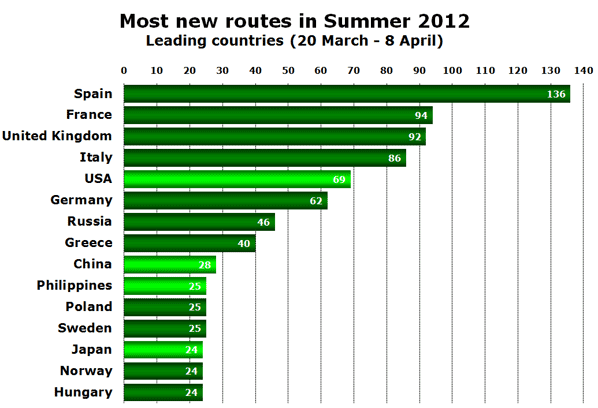 The start of the summer season also marked the launch of Iberia’s own in-house (but separately managed) LCC, Iberia Express, which will gradually take over 17 routes from Madrid between now and the end of the summer season. To start with, it has launched service on flights to Alicante, Malaga, Palma and Seville using four A320s leased from Iberia.

In Romania, Bucharest’s second airport at Baneasa (also known as Aurel Vlaicu International Airport after an early Romanian aviation pioneer) has now closed to commercial flights, but will be retained as a business airport. All of Baneasa’s commercial flights (nearly all operated by either Blue Air or Wizz Air) have been moved to the main airport at Otopeni (also known as Henri Coanda International Airport). These moved routes have not been included in our analysis.

Despite on-going economic uncertainty across Europe (and the addition of more or increased air travel taxes), there are several notable events which will influence air travel demand across the region. London will host the summer Olympics for the first time since 1948, the UEFA EURO 2012 finals (featuring teams from 16 countries) will take place in Poland and the Ukraine, while Germany’s capital Berlin will finally see all commercial flying consolidated at a single, new airport (Berlin Brandenburg) due to open on 3 June.