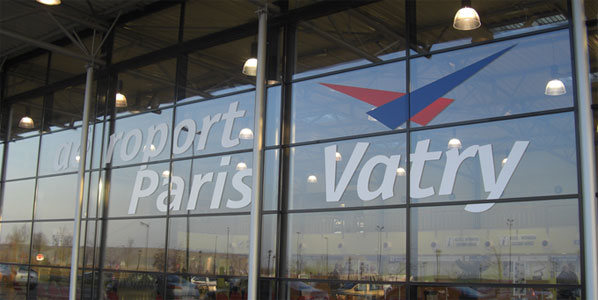 Paris-Vatry: Disneyland Paris in 1.5, Paris 2.5 hours. Reims – the biggest town in the Champagne region – is but 70km. Wealthy champagne producers are apparently already settling down into their sumptuous Jetairfly seats on three weekly flights to Nice which have just started this summer season.

Paris-Vatry Airport can trace its origins back to the early 1950s when it was created as a military air base. Now owned by SNC Lavalin, its almost 4,000-metre runway enables it to handle heavy international cargo flights. In recent years, the airport has started to attract commercial passenger airline services. Located some distance east of Paris, the airport is relatively convenient for visitors to Disneyland Paris, which is a 90-minute bus ride away. Central Paris is around two-and-a-half hours away by dedicated bus service. The nearest major town is Reims, a few kilometres to the north, famous among motor-sport enthusiasts for hosting extremely fast races on public roads between 1926 and 1972. 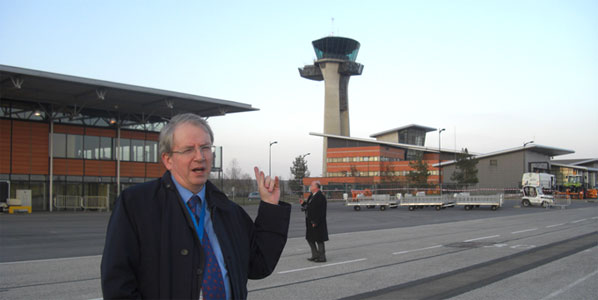 anna.aero publisher, Ralph Anker, proves to us that he actually went to Paris-Vatry to research this article. (Stop pointing at things in photos please, Ralph)

Ryanair was the first airline to offer scheduled services from the airport when it began twice-weekly flights from its Scandinavian bases of Oslo Rygge and Stockholm Skavsta at the end of June 2010. This helped the airport to handle 21,255 passengers in 2010. Last summer, Ryanair added twice-weekly flights to Porto, resulting in a more than doubling of passenger numbers to over 50,000 in 2011.

The start of the summer 2012 season last weekend saw the introduction of two new domestic routes. Ryanair will operate three weekly flights to Marseille, while Jetairfly will introduce seasonal service to Nice starting from 30 March. Flights will operate twice weekly with a third frequency during the peak July-August period. This route is apparently proving popular with wealthy local champagne producers, many of whom have second homes in the south of France.

In addition, Luxair Tours is offering weekly scheduled flights this summer to Palma (weekly between mid-May and the end of September) and Heraklion (weekly from the end of June to the end of September). All of this activity should help the airport to exceed 100,000 passengers for the first time in 2012.