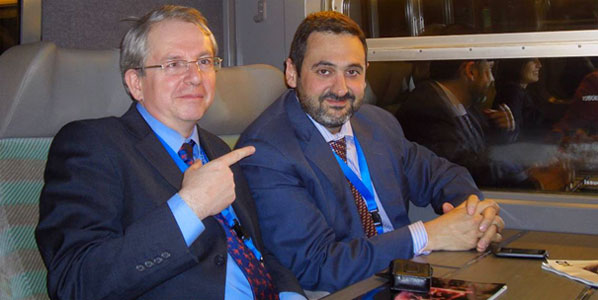 During the recent FrenchConnect event hosted by Paris-Vatry Airport anna.aero’s editor Ralph Anker had the chance to chat (on a TGV train ride!) to Vueling CEO Alex Cruz.

anna.aero: Last year, Vueling was Europe’s fourth biggest LCC, growing by around 12% and carrying 12.3 million passengers. What are your plans for 2012?

Cruz: This year we plan to grow by around 20-25% with major expansion at our main base in Barcelona. Our fleet will grow to almost 60 aircraft and we will be launching some 50 new routes not just from Barcelona, but also from Bilbao, Nantes, Palma and Paris Orly. Our Barcelona expansion will also enable us to provide even more connecting options through our hub there.

anna.aero: From Barcelona alone, you will be starting almost 30 new routes. Do you expect them all to be successful?

Cruz: Obviously when you start flying to so many new destinations, some of which have never been served before, there is an element of risk and uncertainty. We accept that not all of the routes may be successful and we will be monitoring their performance carefully.

anna.aero: Last year you opened a base in Toulouse with eight destinations served non-stop. According to your website booking tool from July onwards you will be operating just four routes from the airport. Has easyJet’s decision to also create a base at the airport forced you to reconsider your position there?

Cruz: We don’t comment on individual route changes. Our plan is to grow significantly this year and become the lowest cost operator in Europe with the highest standards of product and service.

anna.aero: Your shareholder Iberia has now launched its own LCC Iberia Express from Madrid. Has Vueling been involved in this process?

Cruz: Iberia Express is a 100%-owned subsidiary of Iberia. It is managed by a completely separate team, some of whom were formerly employed by Vueling. I am convinced that they will do a great job and make it a success. The Spanish market is highly competitive and Iberia has recognised that it needs to lower costs at its Madrid base. This operation, which uses A320s leased from Iberia, will enable Iberia to remain competitive in the market.

anna.aero: Some other former Vueling employees have set up a new airline Volotea with its first base at Venice Marco Polo airport in Italy, although its head office is in Barcelona. Do you see Volotea as a potential threat in any of your markets?

Cruz: Volotea is a well funded start-up run by people who know what they are doing. We take them seriously. They have chosen not to serve Barcelona but their decision to launch direct flights from Venice to Bilbao, a route that we have been serving indirectly via our Barcelona hub, encouraged us to launch non-stop flights on this route as well.