Fancy an Easter break from London on easyJet or Ryanair? 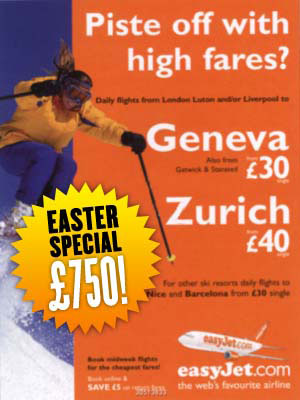 That's revenue management for you: Anyone in London fancying a late 'winter-ski' break to Geneva and travelling out on easyJet Maundy Thursday evening, and returning Monday evening, will pay over £750 ($1,200) for the basic air fare.

With temperatures in the UK dropping by as much as 20 degrees in the last week (from unexpectedly warm and pleasant to below freezing in Scotland) anyone who thought that staying home for Easter might be a great idea thanks to the good weather, is possibly now wishing they had booked to go away somewhere warmer after all. This week’s anna.aero takes a look at how much Europe’s two biggest LCCs (Ryanair and easyJet) are charging for last-minute bookers wanting to get away for the Easter weekend which starts this Friday, 6 April. For each airline their biggest UK base has been selected to maximise the number of travel options; London Gatwick for easyJet and London Stansted for Ryanair. One-way fare data was collected on Tuesday morning for departures in the period Thursday 5 April to Saturday 7 April.

Taking into account return flights between Sunday 8 April and Tuesday 10 April, two destinations on easyJet’s network would require passengers to fork out over €1000 for a return fare this weekend. Anyone fancying a late ‘winter-ski’ break to Geneva and travelling out on Thursday evening, and returning Monday evening would be charged over £750 for the basic air fare. Add on some luggage, Speedy Boarding, some skis, insurance, and payment by credit card and the total for one passenger now exceeds £900 (over €1000). 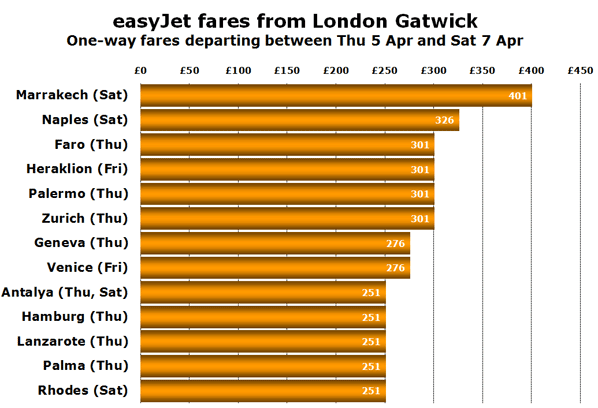 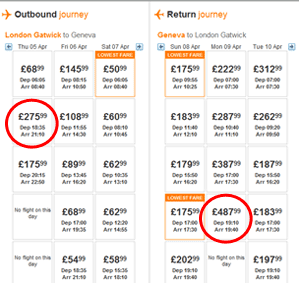 However, this is not the airline’s most expensive fare this Easter weekend. That ‘honour’ belongs to Marrakech in Morocco. With flights on Thursday already sold out the Friday morning flight (departing at 06:25) is on sale at £401 while returning any time on Monday 9th or Tuesday 10th will cost £488. Add in some luggage, Speedy Boarding, a Credit Card fee and a mysterious £9 ‘admin fee’ (for doing what?) and the chances are you wouldn’t get much change out of £1000.

In total 13 destinations were found with basic outbound fares in excess of £250. Some flights have already sold out and anna.aero spotted a Thursday night departure that was on sale for £401 on Sunday night that had disappeared by Tuesday morning.

For bargain hunters some of the cheapest fares were on routes like Cologne/Bonn and Düsseldorf, as well as domestic flights to Aberdeen and Glasgow.

A similar analysis performed on Ryanair’s ‘basic’ one-way fares from London Stansted failed to turn up any routes on sale for more than £300, but around 20 had one-way fares of £240 or more. Leading the way were Faro and Porto (both in Portugal), followed by a raft of Spanish routes, a couple of niche destinations in France, plus Rhodes in Greece and Fez in Morocco. 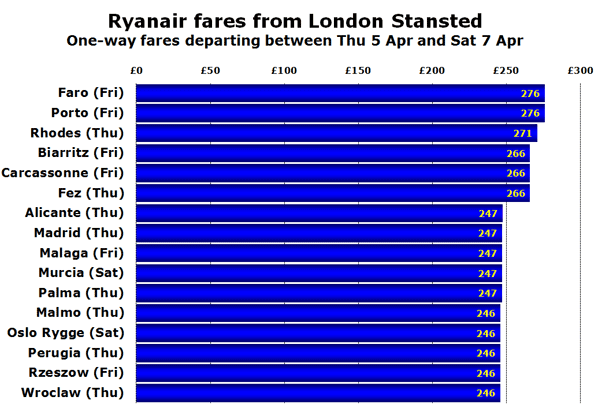 While many of these flights are reasonably long, thus justifying higher fares to cover the higher costs, three Irish destinations (Derry, Dublin and Shannon) were all on sale for as much as £244 one-way. Some Polish and Scandinavian destinations were also fairly pricey. Destinations offering relatively cheap fares at this time of year include Aarhus, Bologna, Dinard, Eindhoven, Frankfurt Hahn, Memmingen, and Plovdiv.

It should be noted that airlines like easyJet and Ryanair are focussed on generating profits and that the Easter holiday period is one of those times of the year when demand surges and airlines face the challenge of charging as much as possible without flying with too many empty seats. At other ‘off-peak’ times of the year airlines offer great deals to try and stimulate demand.