easyJet’s Icelandic pilot David Asgeirsson operated the first easyJet flight from London Luton to Reykjavik where passengers were awaited with a cake and snacks. We have had the cake described as that there is lava all around, with the blue lagoon and the volcano Eyjafjallajokull highlighted. The first officer then cut the ribbon together with Björn Óli Hauksson, CEO of ISAVIA, and Ian Whitting, British Ambassador to Iceland. easyJet’s new Toulouse service was welcomed to Porto in northern Portugal with this boarding card cake filled with detail. 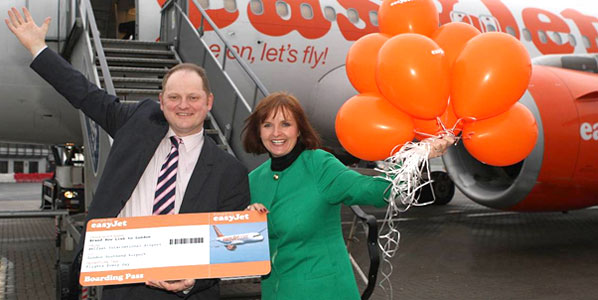 easyJet’s London Southend base launch was celebrated at the other end of the routes as well. At Belfast International Airport, the airport’s business development director Uel Hoey celebrated together with Ali Gayward, easyJet’s UK commercial manager, who said: “We’ve been flying from Belfast for over 13 years and I’m delighted to be launching a service that will be highlighted by speed and efficiency. With flights already to Gatwick, Luton and Stansted, the introduction of the London Southend route means that easyJet now offers the best and most comprehensive options for accessing all parts of London.”