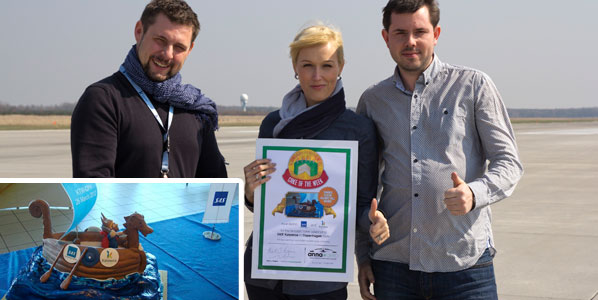 2,825 record reader votes later and the SAS’ Katowice to Copenhagen Viking ship cake entry secured “Cake of the Week” in the first of two readers’ votes anna.aero is staging for the dozens of route launch cakes which marked the start of the 2012 Summer Season. But it was a tightly run race, with the Katowice-created tasty treat securing 25% of the vote – just one point clear of SkyWork’s Cologne/Bonn to Bern cake – baked for the arrival at the German end of the new route.

A Twitter campaign by SAS to its entire 10,200 system-wide following probably had something to do with the Scandinavian-Polish victory. Similar Twitter campaigns by Brussels and Cork (see the Tweets below) secured third and fourth places for cakes baked at either end of the same Aer Lingus route, but, despite comments posted on this site demanding that their vote should be allowed to be combined, in the event anna.aero’s judges never had to wrestle with this predicament as the total Aer Lingus Cork-Brussels cake(s) vote fell short, at a still-impressive 20%.

“We would like to thank all anna.aero readers, fans of Katowice Airport, SAS, and everybody who voted for the KTW-CPH cake during Cake of the Week” said Anna Filip, Katowice’s Airline Relations Specialist. “We’re also pleased by the effects of the cake competiton in using social media to advertise these four new weekly flights to SAS customers for whom Katowice is a brand new destination.”

Airlines and airports entering the second and last readers’ vote accompanying our Summer Season Part II route launch analyses have just one more week of Tweeting to influence the readers’ open voting before anna.aero returns to its regular, confidential judging panel. See this week’s Cake of the Week vote.

To view the results of all last week’s 21 Cake of the Week entries, please click here.

Below: Lobbying for Cake of the Week included a record 29,000 re-Tweet by Manchester for its Ryanair Tallin-Manchester cake. 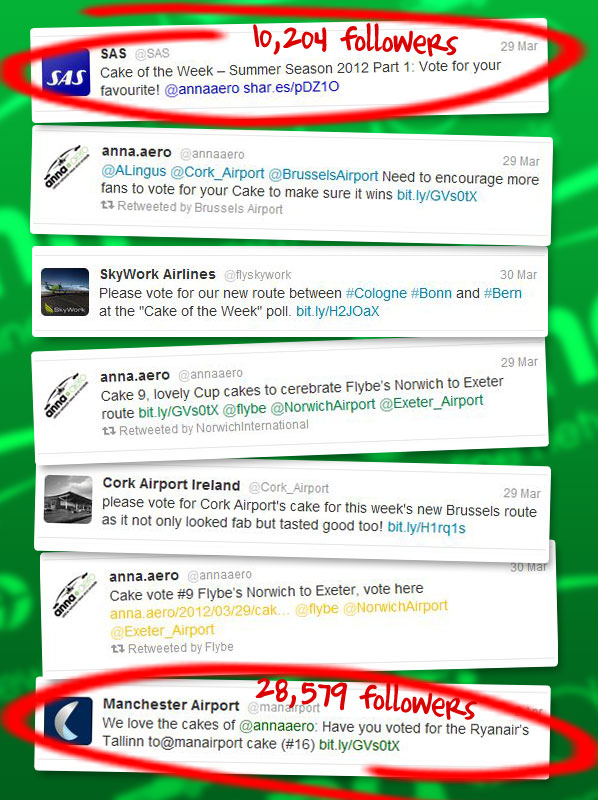