Austral’s last MD80 flight departed this week, as the airline, together with its sister company Aerolíneas Argentinas fulfil their vow to modernise and homogenise their respective fleets. While both airlines face increasing competition domestically, Argentina gradually also becomes attractive for major international players like Emirates.

When Argentina was last analysed by anna.aero in 2008, effects of the early 2000s economic downturn were still clearly visible, and the country’s air traffic was far from recouping the record passenger numbers of the late 90s, in spite of having already grown by almost 40% since 2002. However, significant improvements have taken place since then, most notably traffic recovery to the tune of 21% growth on 2008 figures, in spite of the slightly weaker 2011 performance. Last year, the 33 commercial airports operated by Aeropuertos Argentina 2000 reported 0.6% decrease in passenger numbers, or 22.7 million down from 22.9 million handled the year before. The decrease is mainly attributable to repeated eruptions of the Puyehue volcano, which affected the region’s air traffic for several consecutive months since July 2011. 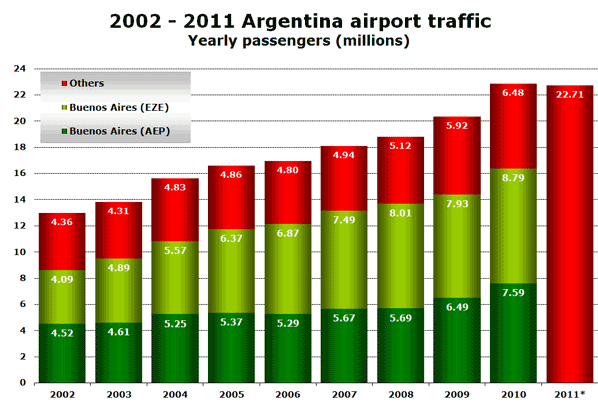 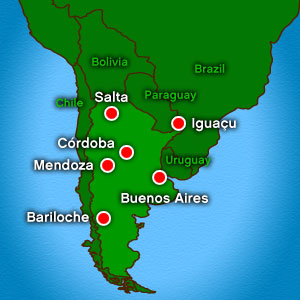 Historically, the country’s traffic has been concentrated in Buenos Aires, which is served by two airports, the prevailingly international Ezeiza and the domestically focused Aeroparque. This trend of dominance continues to prevail; in fact, it has strengthened by five percentage points in the last decade, oscillating around the 70% mark.

Among the best performing regional airports in 2011 were El Plumerillo International Airport in the wine-producing Mendoza province, which saw its traffic pass the one million threshold for the first time as figures grew by 10% (1,007,026 passengers); and Córdoba, where traffic increased by 7.8% (1,492,927) solidifying the airport’s position as the largest regional airport in the country. Furthermore, the north Argentinian Salta Airport, which is known as the main hub of the Andes, closed the year with an 8.3% increase (664,952), while Iguaçu on the border to Brazil noted only a modest growth of 2.1% (633,686).

Notably, Argentina’s usually fourth largest airport, San Carlos de Bariloche, was the most affected by last year’s volcanic eruptions, and saw the traffic decrease by a staggering 63.7%. Only 301,808 passengers were handled in 2011 at the airport, which did not see any scheduled commercial traffic between 4 June 2011 and 13 January 2012.

Domestic capacity back on the growth track 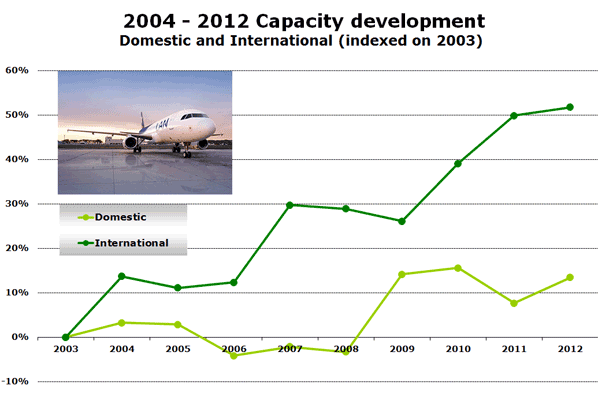 Argentina’s domestic capacity has become even more consolidated since 2008; although the market still is dominated by the country’s flag carrier, there is somewhat more balance between the two biggest players. Aerolíneas Argentinas (together with its sister company Austral) has a 60.4% share of capacity, down from 69% in 2008, when anna.aero last examined the market. LAN Airlines grew its presence considerably and has now 33.8% of seats, up from 23.1% four years ago. A total of four regional operators, including Sol Lineas Aereas, share the remaining capacity.

41% of domestic capacity is concentrated in Buenos Aires AEP, which remains the main hub. In fact, all 10 of the largest domestic routes by frequency involve this airport, as detailed below. 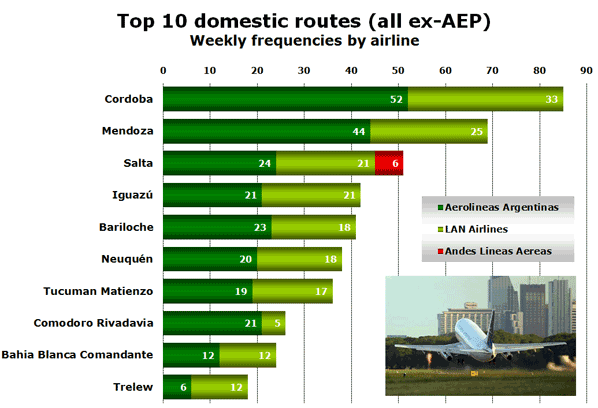 Peru becomes the 4th biggest country market ahead of Spain

Having had a passenger throughput lower than Buenos Aires Aeroparque a decade ago, Buenos Aires Ezeiza is now the country’s most important airport, and has just under 60% of all international services, including all intercontinental flights. Brazil is the largest country market in terms of international capacity, followed by Chile and the US. Notably, European destinations have on average seen the most capacity loss since we have last looked at Argentina.

Qantas provided a significant loss when it moved its Sydney service from Buenos Aires EZE to Santiago de Chile, leaving the connecting market to its alliance partner LAN Airlines. Notably, Aerolíneas Argentinas announced this week that it will fill the vacuum by moving its Auckland service to Sydney beginning on 1 July. United Airlines’ daily service launched this week from NY Newark is a route moved from Washington Dulles.