Atlantic Airways of Faroe Islands in the North Atlantic took delivery of its first A319 after the runway was extended to welcome the aircraft type. Some 1,500 people welcomed the aircraft that will grant the islands access to previously unavailable markets. In June, the airline will begin serving Barcelona.

Boeing remains in the lead in the delivery race against its European rival Airbus as figures for March 2012 are released. The American air framer has delivered six units more than Airbus so far this year.

March was a busy month as airlines took delivery of a combined 100 aircraft from the two manufacturers ahead of the summer scheduling season. In fact, since anna.aero began monitoring aircraft deliveries in 2008, never before have the two air framers had so many deliveries in a month other than December, which usually is the busiest delivery month of the year. 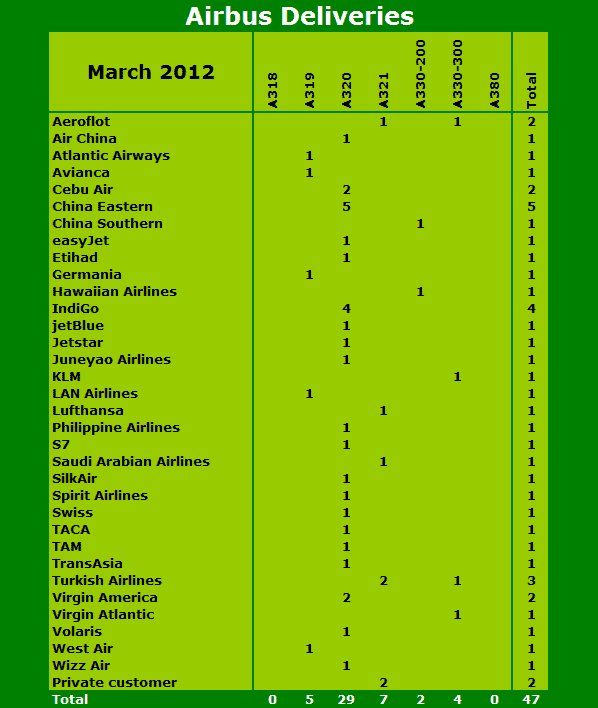 China Eastern Airlines was the top recipient of Airbus aircraft in March, having taken delivery of five A320s. In spite of the turbulence in the Indian market, IndiGo continues to expand and followed with four aircraft of the same type.

A notable new Airbus customer is Atlantic Airways of the Faroe Islands in the North Atlantic. After a recent runway extension, the islands’ main airport Vágar Airport now is able to accommodate the type, opening up new markets for the self-governing Danish islands located between Scotland and Iceland.

Airbus only delivered six widebody aircraft in March; notably all A330s and no A380s. 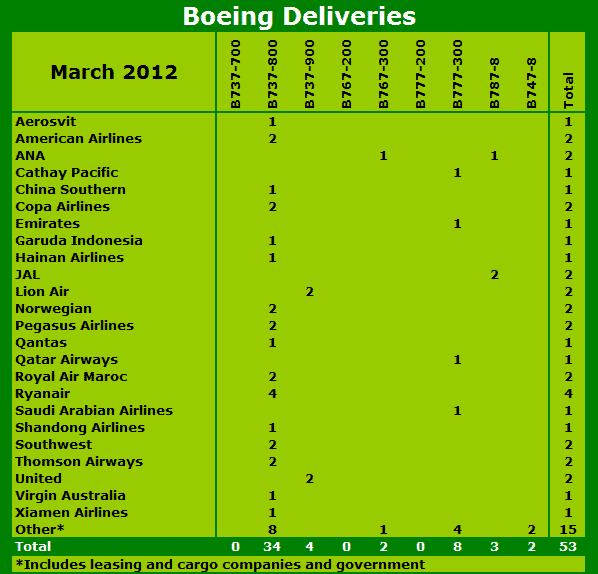 Boeing’s 53 aircraft deliveries in March is a monthly record for the company since anna.aero’s data collection began in 2008. The win is largely thanks to the high number of widebody aircraft delivered, mostly thanks to the continued success of its 777; however, the manufacturer also delivered three 787s to the two Japanese airlines JAL and ANA, the latter which also took delivery of a 767. Additionally, two 747-8F aircraft were delivered to Cargolux and AirBridgeCargo.

Ryanair, which only has 15 aircraft left on order with Boeing, received four 737-800s in March. No other airline took delivery of more than two Boeing aircraft during the month.