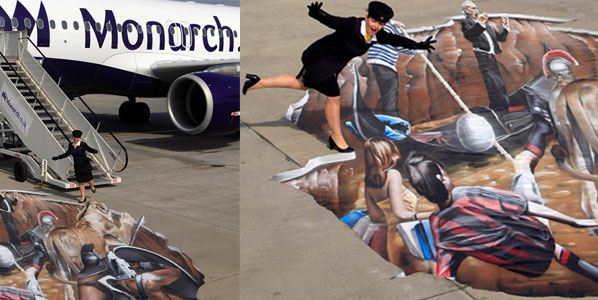 Let them eat paint! For the launch of the new Italian routes to Milan, Rome, Venice and Verona at the end of March, Monarch had these huge 3D artworks painted on the apron at Gatwick. Using aerosol, it took artist Sam Hope 60 hours to create this Italian job into which a member of Monarch cabin crew looks like she is about to realistically fall. Photos: ©London Media Press Ltd.

Although London Luton based Monarch Airlines saw its total passenger numbers rise by a modest 2.4% in 2011 (to 5.93 million), there was a considerable shift within the airline from charter traffic to scheduled traffic. Charter traffic fell by more than a third, while scheduled traffic rose by 23% thanks to the launch of a number of new routes. As a result scheduled traffic accounted for more than three-quarters of the airline’s passengers, a figure that is likely to rise further this year with the recent launch of new scheduled services to Milan Malpensa, Rome Fiumicino and Venice Marco Polo, with Verona services (from Manchester) starting in May. 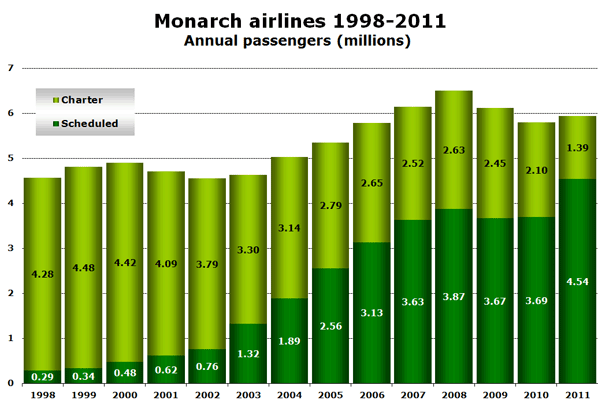 UK bases at Birmingham, London (Gatwick and Luton) and Manchester

Monarch’s network is focused on four UK bases; two in London (Gatwick and Luton), Birmingham and Manchester. These are served by some 20 narrowbody Airbus aircraft (A320 and A321), serving primarily Mediterranean coastal destinations that appeal to holidaymakers in search of sun, sand and relaxation. The downside of this is that demand for these services is extremely seasonal. As a result, passenger numbers in the peak summer months are over three times higher than those achieved during the off-peak winter months. 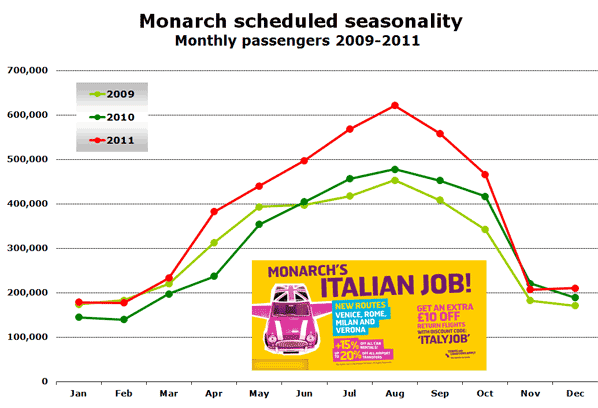 An order for six 787s placed back in 2006 was cancelled last September as the airline confirmed that its future strategy would focus on short-haul flying. 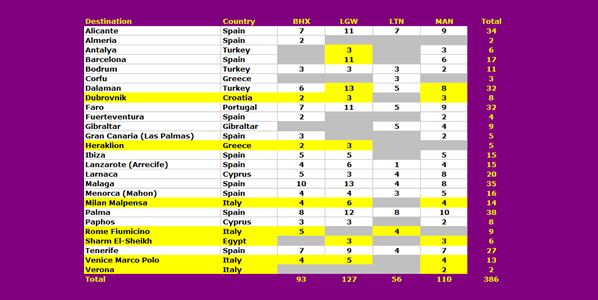 Based on OAG data for the first week in August, London Gatwick (LGW) with 127 weekly departures has now overtaken Manchester (MAN) as the airline’s biggest base for scheduled services, with Birmingham third and London Luton fourth. The airline’s 11 Spanish destinations now account for only just over half (54%) of all weekly flights, followed by Turkey, Italy, Portugal and Cyprus.

A total of 26 destinations are served with scheduled flights this summer, of which seven are new compared with last summer (highlighted in yellow).

Last summer, the leading five individual destinations in terms of weekly flights were Malaga, Alicante, Palma de Mallorca, Faro and Tenerife. This summer, Palma has moved into first place, followed by Malaga and Alicante, with Dalaman and Faro tied in fourth place. Scheduled flights to Turkey only began in 2010 and now represent 13% of the airline’s scheduled flights in summer. Apart from Italy, Croatia (Dubrovnik) and Egypt (Sharm El-Sheikh) are also new country markets for scheduled services since last summer. Destinations that were served in the past with scheduled services include Granada, Jerez, Madrid and Naples.