Virgin America, represented by Virgin Group founder Sir Richard Branson, was welcomed to Philadelphia by Mayor Michael A Nutter and Congressman Chaka Fattah. Philadelphia-born celebrities, such as actor Seth Green and model Amber Rose, were on board the first flight to celebrate. The airport is, however, still dominated by US Airways, which will connect the airport with as many as 16 European destinations this summer.

Last week, Philadelphia International Airport welcomed its first Virgin America flights (from Los Angeles), making it the first significant new airline to serve the Pennsylvania airport since 2004 when Southwest made the airport a base. In June, Alaska Airlines will also add Philadelphia to its network when it launches flights from Seattle, making this a significant year for the airport that last year handled just under 31 million passengers (for the third year in succession), making it the 18th busiest in the US. Competition is provided to some extent by Baltimore/Washington (to the south-west) and Newark (to the north). 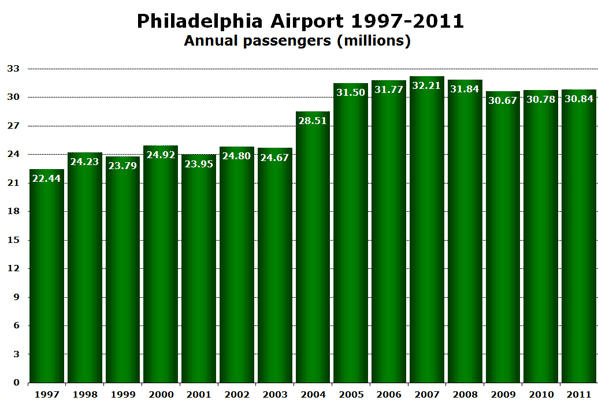 Philadelphia’s home carrier is US Airways, which according to OAG data for April accounts for around 73% of scheduled seat capacity, much of which is provided by its partner airlines such as Air Wisconsin, Piedmont and Republic. The airline serves well over 100 destinations non-stop from the airport (including over 30 international destinations in 20 countries). The airline confirmed to anna.aero that around 55% of the airline’s overall traffic is connecting at Philadelphia, with the figure rising to 70% for international services and around 40% for domestic flights.

The significant growth in 2004 and 2005 can be explained by the arrival of Southwest and its rapid network expansion. However, after an initial burst of growth, Southwest has actually cut back its presence at the airport and now accounts for around 8% of seat capacity (almost 10% if you include AirTran’s services to Atlanta and Orlando), serving 13 destinations, with Delta next up with 6% of capacity and nine destinations. 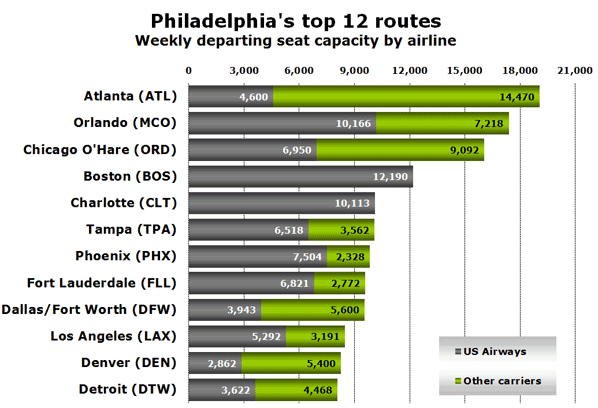 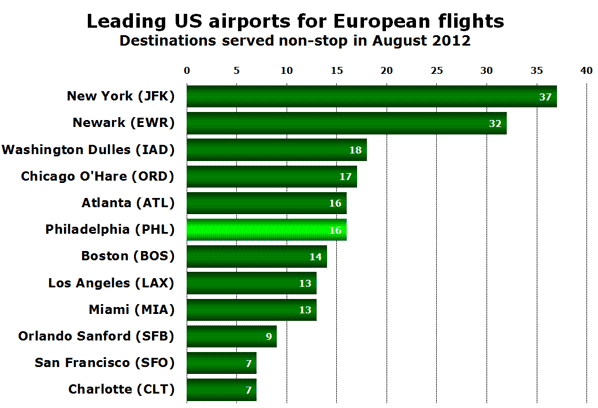 Rumours persist of a possible merger between American Airlines and US Airways, which could have implications for the airport. At present, Philadelphia is US Airways’ biggest long-haul hub on the East coast, but could lose out to American’s JFK hub in the future. Alternatively, both hubs could be successful as has happened in Europe with the Air France / KLM merger that still has two strong, relatively close together hubs in Amsterdam and Paris.