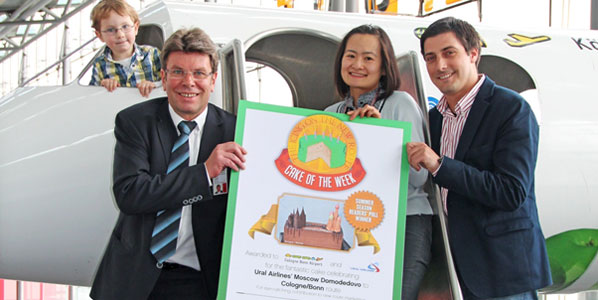 Summer Season Route Launch Cake of The Week Competition Part 2: AirAsia X urged an astonishing 356,700 Twitter followers and 1.4 million Facebook Fans to vote for its Kuala Lumpur to Sydney route launch cake, but this was not enough to snatch the lead from the Ural Airlines’ Cologne/Bonn to Moscow Domodedovo cake – a superb representation of Cologne’s famously twin-spired cathedral and Moscow’s St Basil’s, a UNESCO World Heritage Site.

Altogether, the Ural Airlines Cologne-Moscow cake pulled in 1,792 votes, precisely one-third of the 5,421 votes polled in anna.aero’s online vote, which smashed the previous poll record of 2,825 votes set only last week. Commendation goes out to the Air France’s Malta to Toulouse cake – Malta International Airport was hugely active in lobbying and the Maltese cake led the race throughout the Easter weekend, ultimately achieving a respectable one-quarter of all votes.

easyJet was also very active in supporting its three cakes in the contest – Reykjavik to London Luton, Porto to Toulouse, and a magnificent cake depicting the 2km-long Southend Pier for its historic London Southend Airport base launch. However, despite concern about splitting its vote, the combined polling of the three easyJet route launch cakes still only came to 15%, even though it re-tweeted all easyJet’s 32,000 followers to win votes.

Ulrich Stiller, Director Marketing & Sales of Cologne Bonn Airport, said: “On behalf of the airport, Cologne Tourist Board, and Ural Airlines, we would like to thank all voters and anna.aero readers, for choosing the CGN-DME cake as the Cake of the Week. We are pleased to welcome our newest airline to connect Cologne/Bonn with its Moscow hub, offering our passengers optimal transfers to further Russian cities.”

Paul Hogan, publisher of anna.aero, said: “In congratulating Ural Airlines, Cologne-Bonn and Moscow Domodedovo, I’d like point out that 43 new routes were represented in this contest over the past two weeks involving some 120 airlines and airports at each end of the new routes. In all, 8,246 people have voted partly because messages sent by airports and airlines urging people to vote for their cakes have reached over half of million Twitter users. Meanwhile, anna.aero’s very own Facebook cake vote page reached some 293,000 fans, while the anna.aero cake vote posted on AirAsia’s Facebook page reached a further 1.4 million fans! Cake of the Week may be a bit of fun, but that’s a lot of real, valuable promotion of new routes, both within the industry and to commercially important consumers.”

This week, the Cake of the Week vote decision is returned to anna.aero’s secret judging panel. 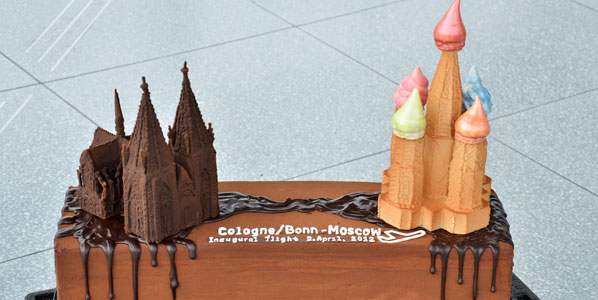 The award-winning cake featuring the cities’ two unique cathedrals – Cologne with its twin spires, St’ Basil’s with its UNESCO-protected domes. Both buildings are the most-visited tourist landmarks in their respective countries.