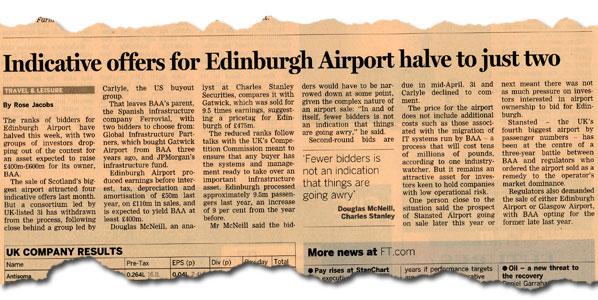 It is expected that we shortly will find out who is the buyer of Scotland’s biggest airport in Edinburgh. easyJet is the leading airline at the airport in terms of seats offered, while Ryanair is scaling back at the airport. There will also be new entrants at the airport this summer as Vueling arrives from Barcelona and Turkish Airlines from Istanbul.

Scotland’s busiest airport (and the UK’s sixth busiest – just behind London Luton and well ahead of Birmingham) handled a record 9.4 million passengers in 2011, up 9% on the previous year. The airport is currently for sale with the winning consortium set to be revealed shortly, after the UK Competition Commission forced current operator BAA to sell either Glasgow or Edinburgh. Spanish-owned BAA chose to sell the bigger and supposedly more valuable airport in the hope of getting a higher price. 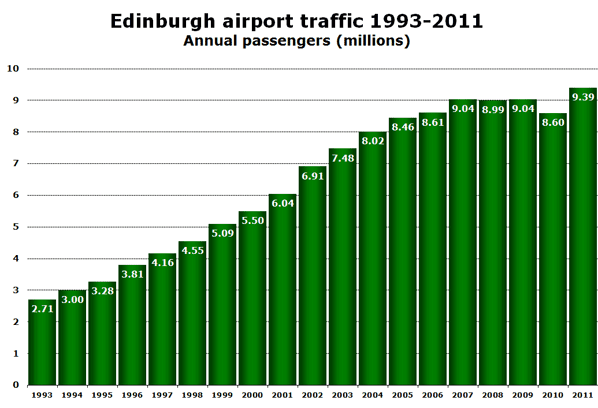 Between 1993 and 2004, passenger numbers at the airport more than trebled, but in recent years, traffic has stabilised despite the decision by Ryanair to make the airport its 27th base at the end of 2008. Ryanair is now one of three carriers than can legitimately claim to be the leading airline at the airport as it offers more non-stop destinations than any other airline. However, easyJet offers more weekly seats (and has started two new routes this week to Dalaman in Turkey and Naples in Italy), while Flybe operates more weekly departures than any other carrier on its predominantly domestic network.

According to CAA data, nine of the airport’s 12 busiest routes last year were domestic, with all five of London’s main airports ranking inside the top 10. Birmingham and Bristol were the other major domestic routes, with traffic on the Bristol route up an impressive 26% thanks to easyJet adding a fourth daily flight (on weekdays) for much of 2011. 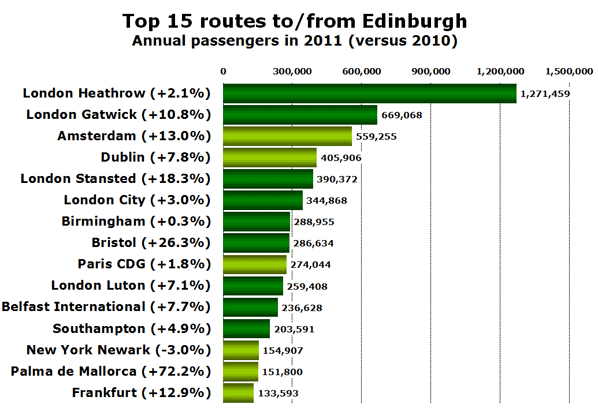 The leading international routes are Amsterdam (easyJet and KLM), Dublin (Aer Lingus and Ryanair) and Paris CDG (Air France and easyJet), with Newark ranking fourth. The fastest-growing scheduled route is Palma de Mallorca, which saw easyJet, Jet2.com and Ryanair all adding capacity in 2011.

In terms of weekly seat capacity, easyJet is now the clear leader, well ahead of Ryanair, British Airways and Flybe. Ryanair announced earlier this year that it would reduce the number of based aircraft at the airport for this summer from seven to six, and recently revealed plans to cut eight routes this winter (Bratislava, Bremen, Frankfurt Hahn, Fuerteventura, Gothenburg City, Kaunas, Lodz and Poznan). Meanwhile, easyJet is expanding its network from the airport with the launch this week of new routes to Dalaman and Naples, more than compensating for the suspension of Cologne/Bonn flights in early January. 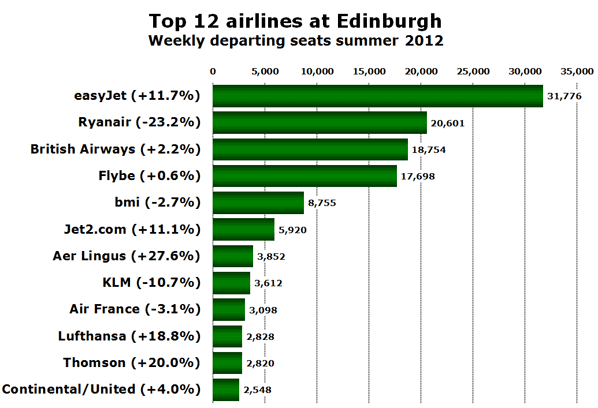 British Airways’ only routes at the airport are all to London (City, Gatwick and Heathrow), while bmi British Midland serves six destinations, although five of these (Brussels, Copenhagen, Leeds/Bradford, Manchester and Zurich) are flown by its regional subsidiary whose future is unclear after the sale of its parent company to British Airways. Transatlantic services are now only offered by United (formerly Continental) to its Newark hub, after Delta withdrew its New York JFK service in September 2009. Just outside the top 12 airlines are three European LCCs; Norwegian which offers flights to Bergen, Copenhagen, Oslo and Stockholm; bmibaby (to East Midlands); and germanwings to Cologne/Bonn.

This summer will see the arrival of two major new carriers to the airport. Europe’s fourth biggest LCC, Vueling, begins serving its Barcelona base/hub from 23 June, while one of Europe’s fastest-growing flag-carriers, Turkish Airlines, begins flights to Istanbul in mid-July.