London to Rio +76% in February, but UK to Brazil slows down compared with other South American countries 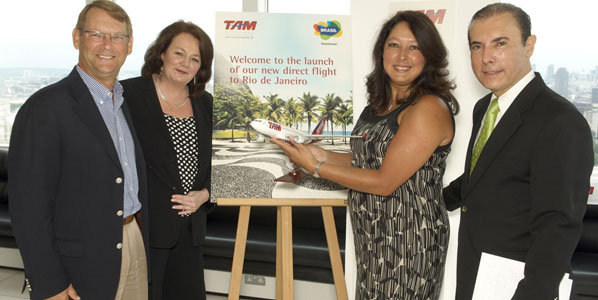 Almost two years after the last route was launched between the UK and Brazil – TAM’s London Heathrow to Rio de Janeiro – the market continues to grow and just became one of the top performers at the London airport. Depending on the alliance choice of the soon-to-be-merged TAM and LAN, the market might soon become all-oneworld territory.

Last month, a number of news sources published news supplied by the UK airport operator BAA about the company’s latest traffic figures. As headlines had it, South America – and Brazil in particular – appeared to have saved the day for London Heathrow in terms of traffic growth. The sky-high year-on-year increases, averaging respectively 51% and 89%, are next to unseen at London’s biggest airport and had the anna.aero team intrigued. 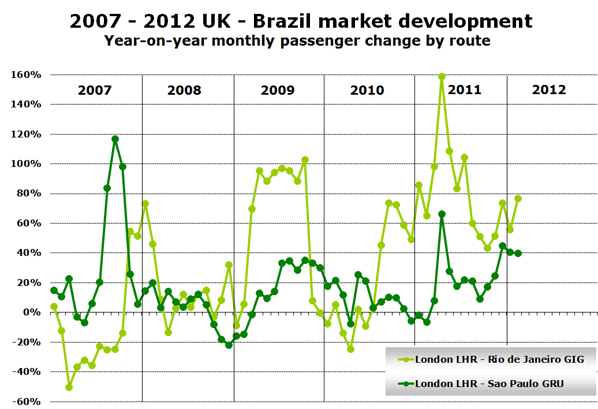 Now that the UK CAA has published its figures, closer examination of monthly traffic figures and comparison with past data shows that volatility in monthly year-on-year development is common in the market and shows no sign of being an anomaly. Sao Paulo is notably a more mature market compared with Rio de Janeiro.

Looking at yearly figures, which are a more stable, traffic between the UK and Brazil has grown steadily since 2006, even during global financial turmoil after 2008. Historically, only the route connecting London Heathrow and Sao Paulo was served directly by both British Airways and TAM (preceded by Varig), while Rio de Janeiro was offered as an extension. This changed in 2008, when British Airways decided to make Rio a stand-alone route; TAM followed suit with non-stop flights launched in 2010. While Sao Paulo retained its dominance, and in 2011 had two-thirds of all passengers in the market, it is Rio that grows the fastest. 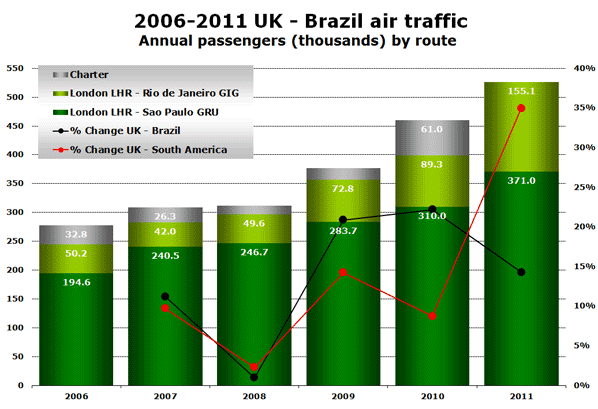 Further comparison against regional trends shows, however, that in this particular market, traffic growth has not only lost some of the post-2008 impetus, but also seems to be underperforming against other South American destinations. Average growth in the UK to South America market was 35% last year, as compared to 14% on the routes to Brazil. However, because charter traffic has ceased, the scheduled traffic segment to Brazil performed significantly better at 31% growth.

British Airways will overtake TAM in 2012 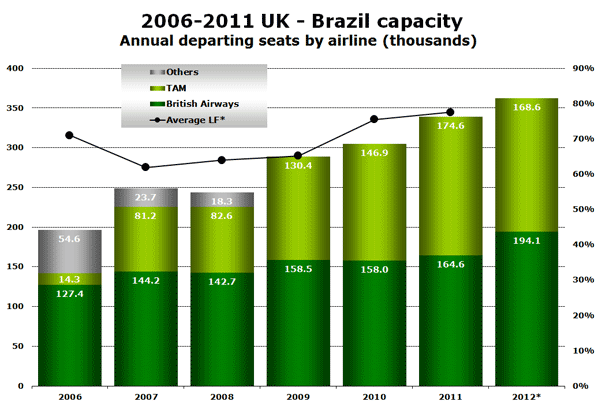 Following the 58% hike in capacity offered by TAM between the two countries in 2008, TAM and British Airways have had roughly similar shares of the market based on seat capacity offered. While TAM maintained double digit capacity growth through 2011, currently loaded schedule data for 2012 reveals that British Airways will increase its capacity by almost a fifth as it doubles its presence in the London to Rio market.