Porter makes Washington its latest US destination from Toronto City; passengers up 35% to over 2 million in 2011 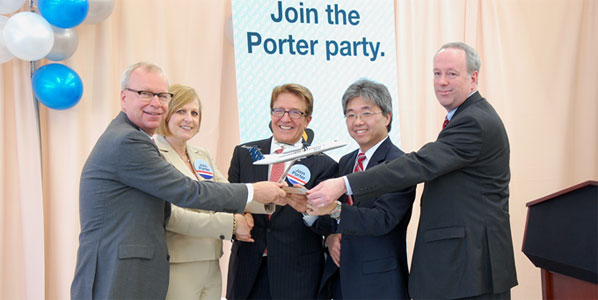 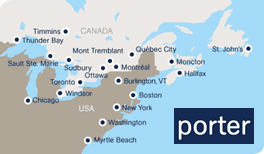 Canada’s Porter Airlines, based at Billy Bishop Toronto City Airport, started operations in October 2006 and last year celebrated its fifth birthday and its five-millionth passenger within days of each other. With a fleet of 26 Canadian-built 70-seat Bombardier Q400s, the airline saw passenger numbers rise by 35% last year to over 2.1 million, while the average load factor rose from 54.2% in 2010 to 61.7%. This week has seen Porter introduce its newest destination, Washington Dulles, which will initially be served with up to three daily flights, increasing to four from mid-May. In the first quarter of 2012, capacity (ASMs) is up almost 30%, while demand (RPMs) is up over 45%, resulting in a load factor increase of almost seven percentage points to 57.3%.

12 destinations served in Canada, seven in US

Having started by operating just domestic routes (primarily from Toronto City to Montreal and Ottawa), Porter began its first flights to the US (shown in bright green in the following chart) in March 2008 to Newark. Since then it has added Chicago Midway (November 2008), Boston (September 2009), Myrtle Beach (February 2010), Burlington (December 2011) and now Washington. 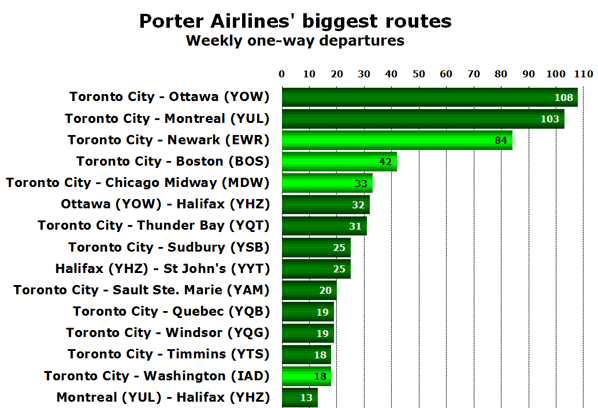 The two leading routes are still Toronto to Montreal and Ottawa, and the top three routes account for virtually half of all of the airline’s weekly flights. Since the beginning of 2011, new routes have been launched from Toronto City Airport to Windsor (April), Sault Ste. Marie (May), Burlington (December 2011), and Timmins (January 2012).

In recent years, Porter Airlines has had a virtual monopoly at the airport, although Air Canada finally resumed flights from the downtown airport last May with Q400s operated by Sky Regional Airlines. Air Canada currently operates just a single route, to Montreal, with up to 15 daily flights. 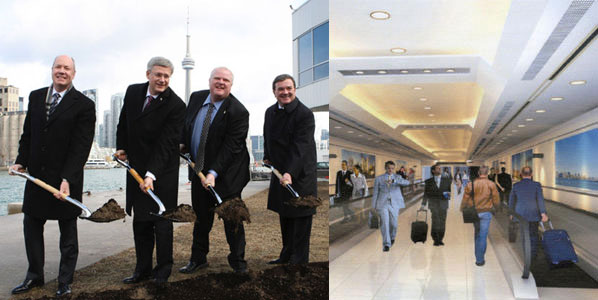 More US routes coming soon? Pedestrian tunnel due in 2014

According to a map in the March/April edition of the airline’s in-flight magazine (cleverly called “re:porter”), other proposed routes include Cleveland, Cincinnati, Detroit, Philadelphia and Pittsburgh, all notably in the US. Another significant development for the airline is that the Toronto Port Authority has finally agreed to build an 800-foot underground tunnel (due to open in 2014) to link the island airport with the mainland. Currently, passengers have to use a ferry for the short connection.