Ryanair cutting flights in nine countries this summer; 270 routes launched but 130 dropped as flights increase by 7% 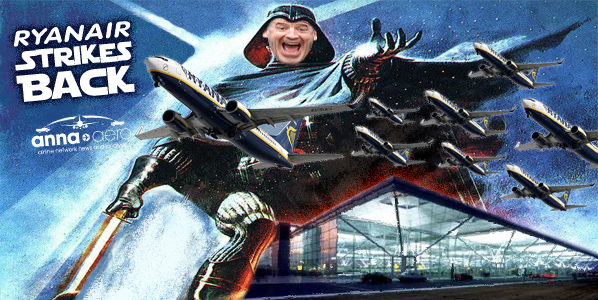 After years of being highly critical of London Stansted, and slashing a total of 40 routes from its biggest base over the last 10 years, Ryanair appears to be suddenly staging something of a Stansted comeback, adding 11 new routes this summer and dropping just three. However, analysis of Innovata data shows the number of flights is virtually identical to last year, so the net gain of eight routes (from 106 to 114) is achieved by reducing frequencies on some existing routes.

Following our recent analysis of easyJet’s network developments for this summer, anna.aero this week does a similar analysis on Ryanair, which measured by passenger numbers is Europe’s biggest airline. After grounding a significant portion of its fleet over the winter period, resulting in a rare decline in passenger numbers, the airline is back with a bang this summer having launched new bases in Billund (Denmark), Budapest (Hungary), Karlsruhe-Baden (Germany), Palma de Mallorca (Spain) and Paphos (Cyprus) all in time for the summer season. This has resulted in the launch of over 150 new routes in recent weeks.

A comparison of weekly departures by country for this August compared with last August reveals that the number of flights operated is up around 7% to almost 11,700. The number of routes being operated has increased by almost 12% to just over 1,300, resulting in the average weekly frequency across all routes dropping 4% from 4.7 to 4.5 departures per week. So which country markets are benefiting most from this growth? 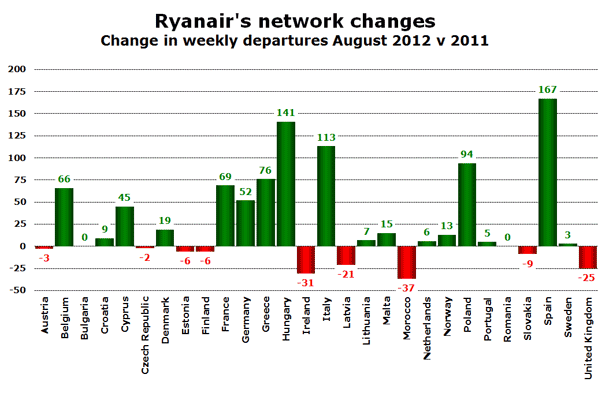 Of the 28 country markets served by the airline (up one since last summer as a result of the new base at Budapest in Hungary), 17 will see more Ryanair flights this summer, 9 will see fewer and two will see no change. The biggest increase in absolute terms will be in Spain followed by Hungary and Italy, each of which will see more than 100 additional weekly departures compared with last summer. The biggest declines are in Morocco, Ireland and the UK.

Despite the reduction in UK flights (equivalent to just over 1%), the UK remains Ryanair’s third biggest market with over 2,000 weekly departures, behind Italy (2,217), and Spain (2,830). France, Germany and Ireland are all way behind vying for fourth place. 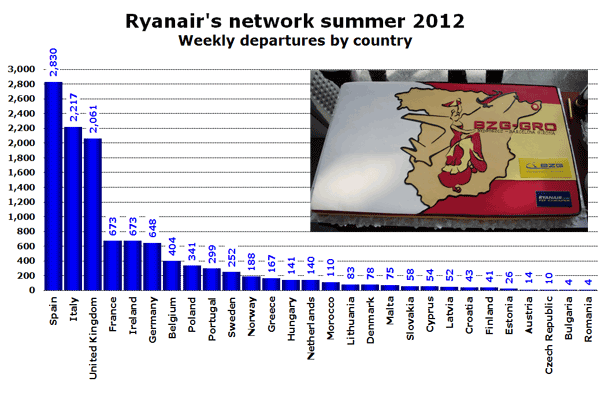 Despite concerns about the Spanish economy,  the country remains extremely appealing as a leisure destination for northern Europeans. The behaviour of Iberia’s strike-prone pilots is also playing into Ryanair’s hands, although the growth of Vueling, the creation of Iberia Express (the cause of the Iberia pilots’ concerns), and the launch of Volotea will create further competition and choices for passengers.

Closer inspection of schedule data reveals that despite launching a total of 269 new routes between August 2011 and August 2012, Ryanair has also dropped 130, leaving a net gain of 139. This analysis ignores the fact that last summer Ryanair temporarily moved its Venice Treviso flights to Venice Marco Polo due to runway works, and that Berlin flights will be moving from Schönefeld to the new Brandenburg airport from the start of June.

Spanish airports occupy three of the top four places for airports that lost the most destinations since last August. Ryanair’s track record of cutting flights and routes when it feels it is not getting the deal it expects from airports, can result in quite dramatic and sudden changes at airports. The latest example of this is the airline’s decision to axe eight routes from its Edinburgh base for this winter, as a result of its favourable five-year deal at the airport expiring at the end of October.

A total of 91 airports have lost at least one Ryanair route in the last 12 months. Clearly most of these airports have also gained new routes from Ryanair, and with 20 new aircraft having been delivered since the beginning of December (taking the fleet to close to 300 189-seat 737-800s) there would appear to be further opportunities for growth this summer.

The last figure may come as a surprise given Ryanair’s repeated criticism of its biggest base, but the fact is that between August 2011 and August 2012 Ryanair will have added new routes from Stansted to Araxos/Patras (27 March), Barcelona (1 December), Budapest (17 February), Chania (27 March), Kos (27 March), Leipzig (3 November), Malmö (1 November), Malta (25 March), Paphos (2 May), Turku (3 April) and Warsaw Modlin (16 July). During the same period it has dropped just three destinations from the airport; Agadir, Hamburg Lübeck and Glasgow Prestwick, the latter a route it once served with as many as 10 daily (yes, daily) flights.