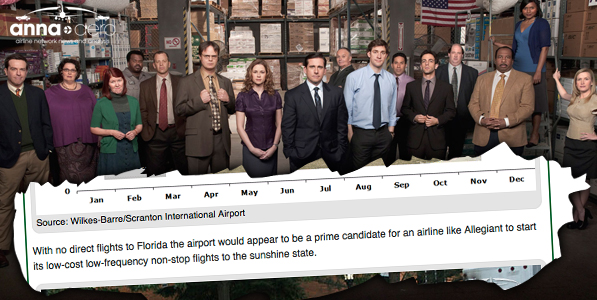 Good offices: Well, well, well, here's what we said in our Wilkes-Barre/Scranton airport profile in August 2010. And so Allegiant Air duly announced this week (17 April) a new route from Scranton to Orlando Sanford starting on 21 June with flights per week. So can we have a big fat cheque from one of these parties for anna.aero please???

All of the leading US airlines have now reported their traffic figures for the first three months of 2012. While the four remaining US legacy carriers continue to report modest growth, some of America’s larger niche carriers are reporting significant growth. Spirit Airlines has revealed that passenger numbers are up 26% in the first quarter of the year, although demand (as measured by RPMs – Revenue Passenger Miles) was up just 19%, indicating a decrease in the average sector length being flown. Allegiant Air also had a good first quarter with passenger numbers up 16.8% and RPMs growing by 17.2%. JetBlue also had a good first quarter with revenue passengers up 13.5% and RPMs up 14.2%. 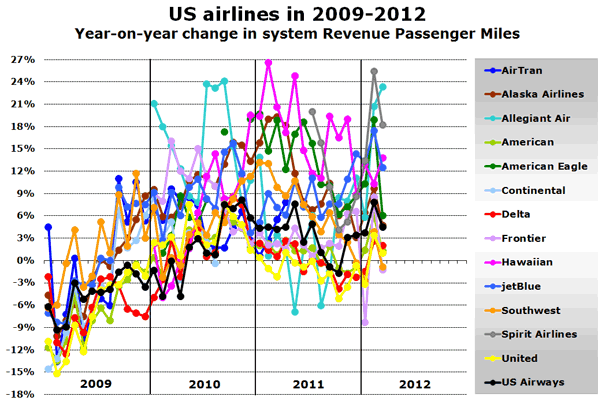 11 out of 13 airlines report higher load factors in March

An impressive statistic revealing how cautious US airlines are being regarding growth is that 11 of the 13 airlines for which data has been collected reported higher load factors in March 2012 compared with March 2011. Five airlines saw year-on-year load factors improve by more than two percentage points (including American, Delta and JetBlue), while only Allegiant Air (down 0.6 percentage points to a still impressive 90.3%), and Hawaiian Airlines (down 0.1% to 84.9%) failed to fill their seats as effectively as a year ago. 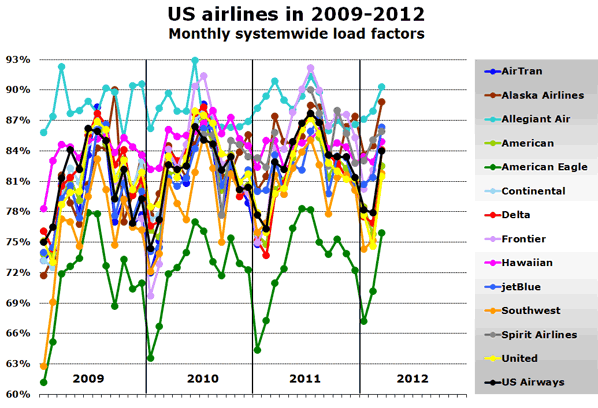