anna.aero reports from Lisbon: easyJet’s base launch in pictures Just as one of easyJet’s two based A319s arrived in Lisbon for a salute by the airport fire brigade, the skies suitably helped with a brief natural shower as well. Santos Pereira and McCall then cut the ribbon, opening the new base that instantly generates five additional routes and around 100 local employees with Portuguese labour contracts. McCall: “We expect to carry four million passengers to and from Portugal this year – around 10% of the market where we are the second-biggest airline, and in November, a third aircraft will be added to the Lisbon base.” The Portuguese media showed great interest both in the views of the minister and that of easyJet, which held a press conference with Javier Gandara, GM Spain and Portugal; McCall; and José Lopes, Commercial Manager Portugal. In the evening, a cocktail reception was held with spectacular views from the rooftop terrace at The Silk Club in downtown Lisbon. Opening speeches were held by Lopes and McCall, who revealed having a Portuguese grandmother and therefore was particularly proud and honoured to open a Lisbon base. António Padeira, Director of Turismo de Portugal’s tourism promotion division, then declared that the organisation is very committed to the new easyJet base and will work hard to support the new routes. Among guests enjoying themselves were Francisco Pita, Deputy Manager of Lisbon Airport, who was delighted to celebrate the new partnership with Warwick Brady, COO easyJet. Towards the end of the evening, even anna.aero’s Deputy Editor Andreas Akerman lost his tie and posed for the camera with Javier Gandara, anna.aero reader and easyJet’s GM Spain and Portugal.

Cake of the Base Launch: The Rooster of Barcelos 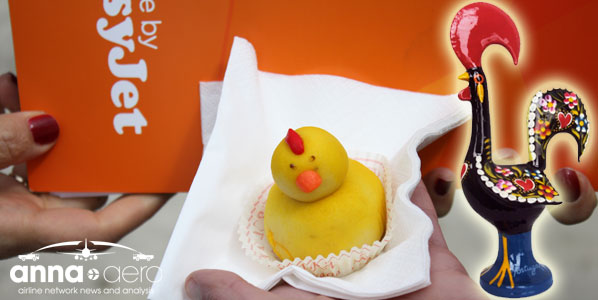 For those of you who didn’t know, the Rooster of Barcelos is a famous symbol for Portugal. anna.aero’s in-house cake jury is not yet sure if this will win the desired Cake of the Week prize in this week’s full issue on Thursday, but having been served during the easyJet Lisbon base launch event, it certainly wins Cake of the Base Launch.

For full details about easyJet’s operations in Lisbon, see this week’s analysis and interview with CEO Carolyn McCall.