easyJet opens base in Lisbon; network grows by five to 21 destinations with TAP Portugal competing directly on 14 Two easyJet A319s are now stationed in Lisbon, the low-cost airline’s latest base. Of the five new routes, easyJet faces competition on all but one. Air France has already been scared away from one route, but struggling TAP Portugal competes on 14 of easyJet’s 21 routes.

Last week saw easyJet open its newest base and first in Portugal. Two 156-seat A319 aircraft will now be based at Lisbon, enabling the launch of five new routes (Amsterdam, Asturias, Bordeaux, Copenhagen and Venice). This will raise to 21 the number of destinations served non-stop by easyJet from Portugal’s busiest airport. A third aircraft will be added to the base in November for the winter scheduling season.

The airline serves Terminal 2, which just weeks ago was completed as a new low-cost facility, having previously served as the airport’s domestic terminal. 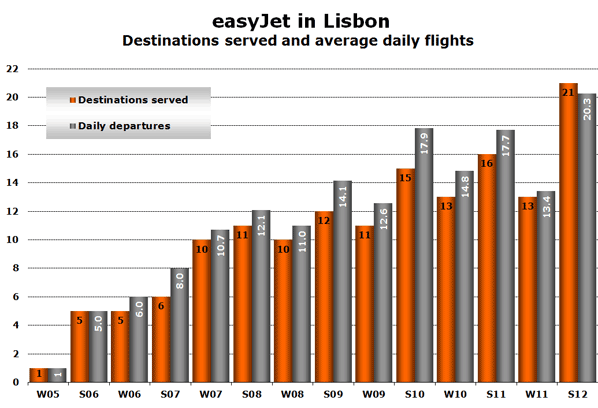 easyJet first started serving Lisbon in October 2005 from its Swiss base in Geneva and since then has been gradually adding more destinations from its bases across Europe. Although basing aircraft at the airport enables the airline to start service to non-base airports, anna.aero estimates that the number of weekly flights operated by easyJet from Lisbon initially will be only around 15% higher than last summer due to some frequencies on previously existing routes now being operated from the Lisbon end.

According to figures published by the Portuguese airport operator ANA, easyJet handled just over 1.6 million passengers at Lisbon last year (an increase of 13.7% on 2010), which represents 10.9% of all passengers at the airport. This means that easyJet even before launching its base was the second-biggest airline at the airport; a position that it now strengthens. National carrier TAP Portugal still dominates with almost 58% of all passengers, and also saw passenger numbers grow by 8% in 2011.

The two airlines will compete head-to-head on 14 of easyJet’s 21 routes, while easyJet has a monopoly on six of the remaining seven routes. Notably, Air France will drop its daily operations on the Bordeaux route at the end of this month, leaving only TAP Portugal to compete with easyJet on the low-cost airline’s new route. Of the five new routes launched last week, only Asturias in northeast Spain is uncontested, having previously only been served by Iberia between 2008 and 2010, using Air Nostrum CRJ200s.

Nine of easyJet’s 21 routes will be served at least daily this summer, resulting in the average weekly frequency across all routes being a relatively high (for European LCCs) 6.8 flights per week.

Notably, easyJet has never dropped a route it has launched to Lisbon and only three routes (from Basel, Berlin and Bristol) have seen frequencies reduced since their launch.

Javier Gandara, easyJet’s GM Spain and Portugal, said: “easyJet expects to carry 225,000 additional passengers to 2m at Lisbon and 4m to and from Portugal in the first year of operation and grow its passenger numbers still further in the long run. With aircraft stationed locally, it is a key competitive asset to offer a tailored service that fits the local demand in terms of frequencies and destinations.”