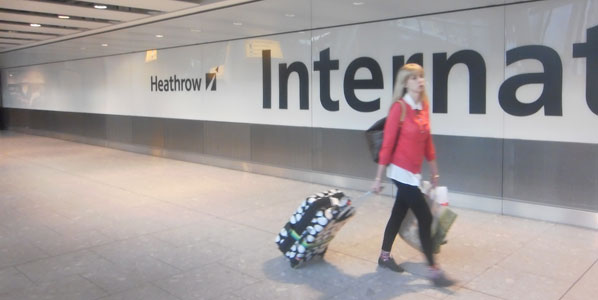 Recent reports in the media have referred to a study claiming that airlines choose not to serve the UK due to London Heathrow’s congestion problems. However, our publisher was able to take this picture of a relatively empty Terminal 5 this morning and our analysis shows that more airlines have dropped than added routes at Heathrow in the last year.

London’s two runway Heathrow Airport continues to set new records. Recent figures published by the airport’s operator BAA show that on a rolling 12-month basis, the airport managed to handle over 70 million passengers for the first time its history between April 2011 and March 2012. As BAA Chief Executive Colin Matthews has said: “Reaching 70m passengers at Heathrow is a major milestone, demonstrating the resilience of the airport in an otherwise challenging economic environment. Increases in load factors drove this; however Heathrow continues to operate at 99.2% capacity – placing constraints on airlines’ ability to introduce new flights to the emerging economies which are so vital to UK economic growth.” The 60 million mark was passed in 1998. 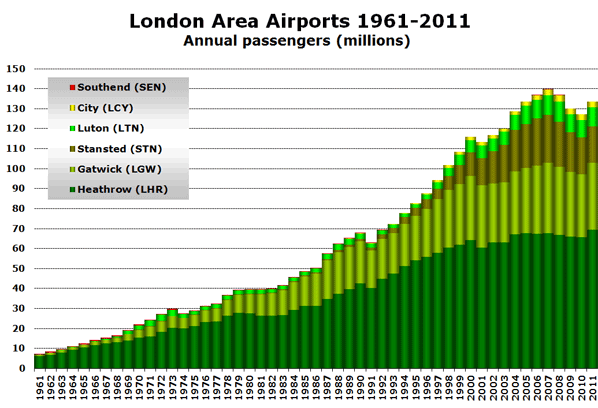 Passenger traffic at London airports has grown from under eight million passengers in 1961 (when Southend was London’s third busiest airport) to a peak (so far) of just under 140 million in 2007. London Heathrow’s share of this has declined from a peak of around 83% in the early 60s, to under 50% in 2006-2008. During the recent economic downturn, Heathrow’s share has actually grown again to almost 52% in 2011.

Heathrow’s capacity issues mean that once airlines get a foothold at the airport, they tend to stay there. However, with new slots hard to come by, airlines without a presence at the airport occasionally have to resort to borrowing or buying slots from incumbent carriers. Analysis of Innovata data for August 2011 and August 2012 reveals what changes have occurred during this period. Ignoring the shift of all Berlin flights to the new Berlin Brandenburg airport (from 3 June), the resumption of flights to Tripoli in Libya, and the merger of Continental and United (Continental’s Newark and Houston services are now re-branded as United service) leaves the following as significant route developments.

Is there still a chance for a third runway at Heathrow?

While the current Conservative/Liberal Democrat coalition government in the UK is apparently still reluctant to consider the idea of a third runway at the airport (something the previous Labour government was actually in favour of), some of the alternative proposals for a completely new airport in and around the Thames estuary, even if approved and funded, would take many, many years to complete. To make financial sense any such new airport would really need all other London area airports to close to provide the economies of scale (and traffic throughput) required financially. However, since all of the existing London airports are privately-run by a variety of companies, it would be impossible for any government to enforce this, bringing the whole issue of a new airport into question.