Jazeera Airways last week launched the historical route between Kuwait City and Najaf in Iraq, bringing its Kuwaiti network to 18 destinations. Although the local competitor Kuwait Airways competes on Jazeera’s key routes, the threat of foreign competitors may be even greater. (We are very grateful to our colleagues at Arabian Supply Chain for the excellent photos.) 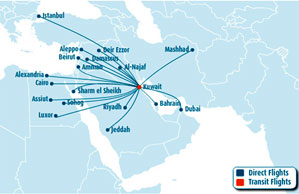 Since launching flights in October 2005, Kuwait-based Jazeera Airways has had its fair share of ups and down. After growing rapidly and establishing bases at Kuwait International Airport and Dubai, the airline closed its Dubai base in May 2009, just prior to the launch of flydubai in June 2009. Since then, it has reduced its fleet from a peak off 11 operated aircraft to a current fleet of just six A320s (the newest of which was delivered on 28 February), each seating either 159 or 165 passengers. Surplus aircraft have been leased to SriLankan and Virgin America. The airline has a further three A320s on order, two of which will be delivered in 2013 and the last one in 2014. Last year, the airline carried 1.2 million passengers (at an average load factor of 65.2%), made a profit (operating margin was 25.6%), and saw its average yield grow by almost 50%, helped by the demise of local rival Wataniya Airlines. According to the airline’s own research, some 22% of passengers are travelling on business, 34% are visiting friends and family, while 42% are on holiday. The final 2% are taking part in religious tourism.

Last week, the airline started its latest route, a twice-weekly service to Najaf in Iraq, bringing the number of destinations served non-stop from Kuwait to 18. According to the airline’s recent presentation of last year’s financial results, it appears not to plan any further new routes in the foreseeable future.

Last year, passenger numbers at Kuwait International Airport rose by a modest 1.6% to just under 8.5 million. Kuwait Airways is the leading airline at the airport with around 27% of seat capacity in April, followed by Jazeera Airways with 13%. The two airlines compete head-to-head on 12 routes. 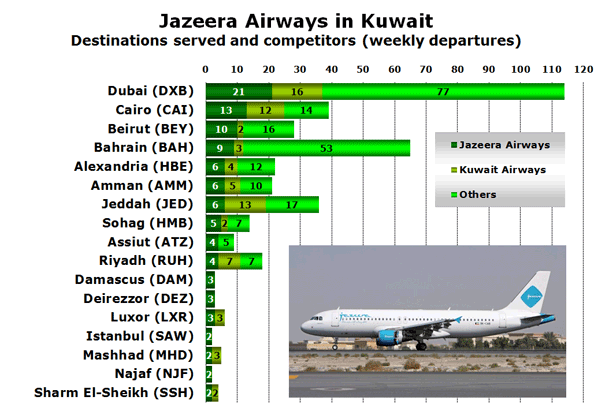 According to the airline’s booking tool, twice-weekly flights to Aleppo in Syria resume on 1 June. Although Kuwait Airways competes with Jazeera on all four of the routes the carrier serves at least daily (Bahrain, Beirut, Cairo and Dubai), a possibly more serious threat on these routes comes from Emirates and flydubai who between them offer 10 daily flights to Dubai, Egyptair who offer twice-daily flights to Cairo, Middle East Airlines who offer 12 weekly flights to Beirut, and Gulf Air which operates six daily flights to Bahrain.

One of Jazeera’s key strengths is its punctuality (94% in 2011), which is consistently the best of any airline operating in the Middle East, despite the high utilisation of its aircraft.