What would be the network implications of an American Airlines and US Airways merger? 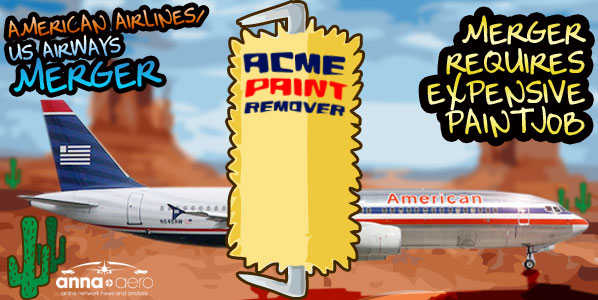 Recent moves by various interested parties to lay the groundwork for a possible merger between American Airlines (AA) and US Airways (US) would obviously have many financial, organisational, operational, and staffing implications. However, anna.aero is more interested in the network implications of a combined airline. A look at the leading airlines at all North American airports (in terms of weekly departing seat capacity) reveals that American Airlines ranks fourth, just ahead of US Airways. Combing the networks of these two carriers would make ‘American Airways’ the leading airline across North America, leaving the US market with three mega-major legacy carriers (American, Delta and United) and one mega-LCC; Southwest. 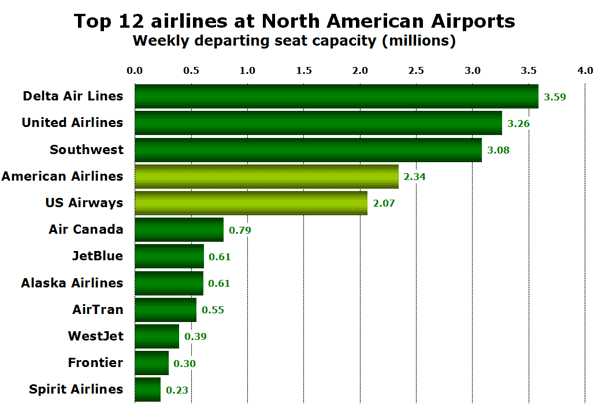 Southwest (which would then be ranked fourth) would then be five times bigger (in terms of weekly seats from North American airports) than the next biggest US carrier, JetBlue.

Six major hubs, but only Phoenix in the west

Looking at the top 12 airports (by current weekly seat capacity) shows that the merged airline’s centre of network gravity would be very much more towards the east coast than the west. Of the top 12 busiest airports for the combined carrier, only two (Phoenix and Los Angeles) are located in the western half of the US. 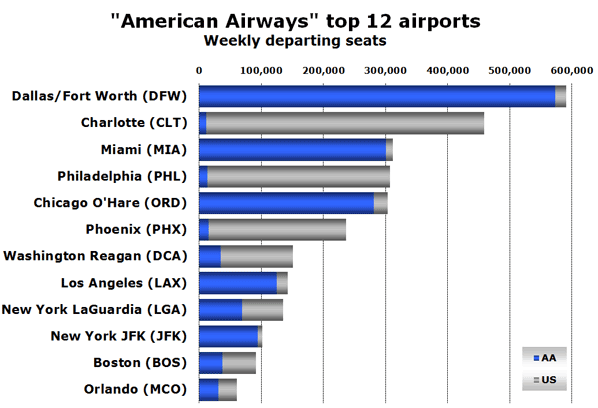 Analysis of current schedule data reveals that there are nine US domestic airport-pairs where American Airlines and US Airways currently both operate at least four daily flights. The following table summarises the routes (ranked by total weekly departures from the two airlines combined) and which other carriers operate the same routes.

Only the three routes involving Chicago O’Hare feature a third carrier (United all three cases). A merger between American and US Airways would thus result in six monopoly routes, currently served with between 10 and 15 flights per day.

19 European destinations served; 17 by US Airways, 12 by American

Given that Delta is a member of SkyTeam, and that the ‘new’ United (which merged with Continental) is firmly established within the Star Alliance, it would appear to make sense for a ‘new’ American to remain in oneworld, even though US Airways is currently a Star Alliance member. This would likely have an impact on the shape of the transatlantic network, the current state of which is summarised below.

Charlotte and Philadelphia services to Frankfurt, Munich (both Lufthansa hubs), Lisbon (TAP Portugal hub), Brussels (Brussels Airlines hub) and Zurich (Swiss hub) would likely be reconsidered due to Star Alliance feed being lost at the European end of the routes.