Norwegian carried 15.7 million passengers in 2011 – an increase of 2.6 million year-on-year. It offers 296 scheduled routes to 114 destinations and is planning long haul operations from 2013, operated using the 787 – of which it currently has six on order. Daniel Skjeldam, Norwegian’s Chief Commercial Officer, sat down with Ross Falconer following his address at last week’s ACI EUROPE Airport Trading Conference in Oslo. 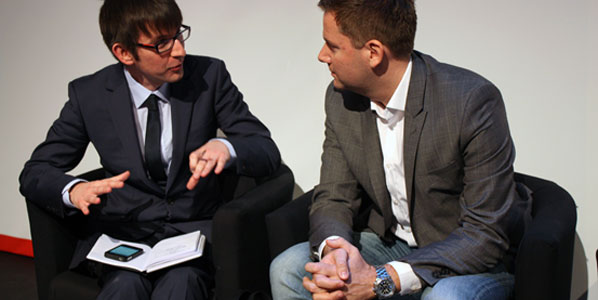 Skjeldam: “When we launch our long haul services in 2013, there could be more than the two announced routes…” The guy with the smart suit and smartphone is the anna.aero journalist; Skjeldam sports the conventional LCC uniform of jeans and a Breitling watch (essential to all aviators and attractively priced at only $3,000-$100,000+).

anna.aero: You have recently put in very large narrow-body aircraft orders with both Airbus and Boeing. Are they all for use at your bases in northern Europe or do you intend to set up AirAsia-style branded joint ventures in other parts of the world as you go long haul and seek feed at the other end?

Skjeldam: We see a lot of potential in Europe. I cannot discuss what we will do in the future, but there is a lot of growth potential where we operate today. I believe we can utilise the aircraft we have ordered on our existing business model. We plan to replace our aircraft quite often and keep up with new technology. Our aircraft orders give us great flexibility – flexibility is the key in terms of how we manage our aircraft.

anna.aero: If you base your long haul aircraft at the other end of the route, will you be serving your Nordic bases only, where you have connectivity, or are you looking at destinations in all of Europe?

Skjeldam: To start with, we will see enough demand in the Nordic countries. We believe Asian carriers will be competitive in years to come and we need to be in a position to compete with them. In Bangkok, for example, we plan to employ Thai crew.

anna.aero: Are any long haul destinations other than Bangkok and New York confirmed yet?

Skjeldam: I am not saying which other long haul routes we plan to operate yet, but we are having a lot of dialogue with other airports around the world. When we launch our long haul services in 2013, there could be more than the two announced routes – Bangkok and New York.

anna.aero: In Europe, you have moved to a couple of more low-cost oriented airports: from Düsseldorf to Cologne/Bonn and gradually from Vienna to Bratislava. Why? Are you trying to differentiate yourselves more from legacy network carriers?

Skjeldam: We see Vienna and Bratislava as complementary and are operating at both. We have moved from Düsseldorf to Cologne/Bonn partly because of the night curfew and partly because the cost level at Cologne/Bonn is lower. We are not trying to differentiate from the legacy network carriers, it’s about knowing our customers and where they are going, and streamlining operations.