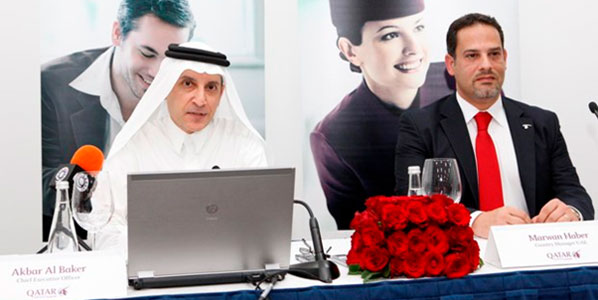 “Every day, we make the world a little smaller” – and that’s not the only thing Qatar Airways is shrinking. Speaking at Dubai’s Arabian Travel Market this week, the airline’s CEO Akbar Al Baker (left) suggested that the MEB3 (‘Middle East Big 3’) was really only a MEB2 by dismissing the importance of Etihad: “We are profitable, Emirates has always been profitable, so if Etihad is profitable for the first time, I am very happy for them, but when it comes to dominance, there will only be two airlines…”

Since anna.aero last looked at the “Middle East Big 3” (MEB3) airlines of Emirates, Etihad and Qatar Airways back in September 2011 there have been 21 new non-stop route launches.

Of these Baku, Benghazi, Chengdu, Chongqing, Dallas/Fort Worth, Lusaka, Oslo, Rio de Janeiro, Seattle and St. Petersburg are new destinations for the MEB3 carriers taken as a whole, while Entebbe is served non-stop for the first time.

Etihad appears to have dropped flights to Alexandria in Egypt while Qatar Airways has suspended flights to Aleppo and Damascus in Syria, and dropped Cebu in the Philippines. Ho Chi Minh City and Stuttgart which were previously served non-stop, are now served via Bangkok and Zurich respectively. As a result Qatar Airways still serves 91 destinations non-stop while Emirates is up to 103 and Etihad has reached 69.

Emirates has also added one-stop flights to Buenos Aires (via Rio) and Harare (via Lusaka). Qatar Airways has added one-stop flights to Kigali (via Entebbe), Tbilisi (via Baku) and Tripoli (via Alexandria). Etihad has dropped its one-stop service to Cape Town. Of these Harare (Zimbabwe), Kigali (Rwanda) and Tbilisi (Georgia) are new destinations for the MEB3 carriers. Since our last analysis in September Emirates has increased its non-stop flights from its home base by 9.6%%, Etihad by 11.2 and Qatar Airways by just 7.0%.