The bmibaby and bmi regional route networks – so what’s for sale? 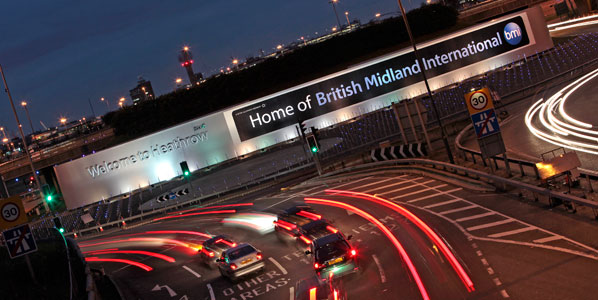 The bmi endgame now boils down to bmi regional's Heathrow slots, currently squatted by tiny 49-seat regional jets. With no neutral buyers on the horizon, these will be quietly transferred back to the BA slot pool for operating big new long haul routes. (Photo: JCDecaux Airport UK)

Since acquiring bmi British Midland from Lufthansa, British Airways has made it clear that if it is unable to find a buyer fairly soon for the airline’s low-cost subsidiary bmibaby and regional subsidiary bmi regional, it will close them both down. So what would a prospective buyer be getting if it wanted to approach BA with an offer? Last year, bmi regional carried 414,000 passengers at a load factor of 62.3% and currently has a fleet of 19 Embraer regional jets; 15 49-seat ERJ-145s and four 37-seat ERJ-135s. Meanwhile, bmibaby transported 2.2 million passengers in 2011 at a load factor of 72.1%. Its current fleet comprises 14 737s; 12 -300s and two -500s.

Although bmi regional’s network has just five domestic routes compared with 11 international routes, these domestic routes account for over half of all weekly frequencies. On two of these routes, bmi mainline operates some of the flights, presumably when larger aircraft are needed: London Heathrow-Manchester where an additional 21 weekly flights are operated by the parent company, and on Heathrow-Aberdeen where an occasional peak flight is also operated by bmi itself. 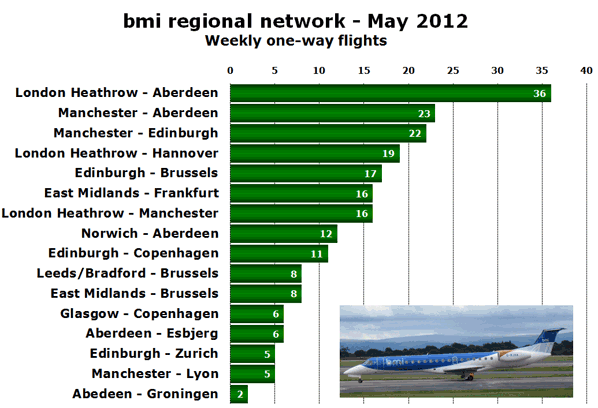 Significantly, bmi regional operates around 10 flights per day from London Heathrow across three destinations. These are valuable slots to BA and it is not clear what would happen to them if the airline were to be sold. These three routes also account for around one-third of bmi regional’s weekly capacity.

Many of the international services are to Star Alliance member hubs, such as Brussels, Copenhagen, Frankfurt and Zurich, which made sense for bmi when it was a Star Alliance member. At over 1,200 kilometres, the Edinburgh-Zurich route is the longest operated by bmi regional.

Our previous analysis of bmibaby showed how the airline’s multi-base network had evolved (peaking at 4.3 million passengers in 2007) before contracting to only just over half that many passengers in 2011. Last year, the airline decided to close its Cardiff and Manchester bases to focus on just three bases; at Belfast City Airport, Birmingham and East Midlands. Growth at Belfast and East Midlands followed the withdrawal of Ryanair (from Belfast City) and easyJet (from East Midlands), although Ryanair still has a significant presence at both Midlands airports. 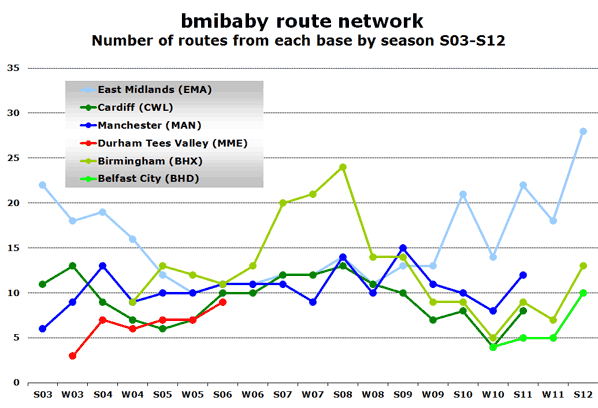 Given BA’s lack of interest in the UK Midlands (just 10 years ago it was the dominant carrier at Birmingham, but now has no flights there at all) and Belfast, and the aging bmibaby fleet, it is pretty obvious why it has no interest in maintaining the operation. According to UK CAA figures, the airline’s 737s had an average utilisation of under eight hours per day in 2011. This compares, for example, with easyJet’s A319s which averaged over 10 hours per day.

The people who might buy these airlines seem otherwise preoccupied. When BA chose to pull out of its last remaining UK regional operations (BA Connect) in 2006, it sold the airline to Flybe. But Flybe is busy developing its Nordic bases and has already had to deal with phasing out expensive, smaller regional jets. It seems unlikely that it would want to do this again. Another UK regional carrier is Eastern Airways but, although it has a couple of Embraer regional jets in its fleet, Eastern is predominantly a turbo-prop operator, and given the current economics of regional operations with high fuel prices, small regional jets are a luxury few can afford.

If both airlines were to be closed down, Ryanair would probably start some new routes from Birmingham and East Midlands (or at least add capacity on existing routes) to make up for the withdrawn bmibaby services, while other carriers might cherry pick a few of bmi regional’s routes. After all, acquiring goodwill in this way comes entirely free-of-charge and with no pension or repayment plans on elderly aircraft. The risks of another competitor turning up to ruin the scenario does seem low, although we have been wrong before, having confidently predicted last September that “it seems unlikely that Star Alliance Lufthansa would let bmi fall into the hands of oneworld British Airways“.

In essence, the bmi endgame now boils down to the slots related to bmi regional’s 10 flights from Heathrow currently squatted by the airline’s tiny 49-seat regional jets (the smallest aircraft operating at Europe’s busiest airport). It will not want these to go to an enemy, so with none of the usual neutral buyers in sight, it does look like this remaining asset will be quietly transferred back to the BA Heathrow slot pool to be used for some hopefully big new long haul routes.

***STOP PRESS*** Flybe today (2 May) announced plans to start five new routes from East Midlands starting this winter. All five destinations (Amsterdam, Edinburgh, Glasgow, Jersey and Paris) are currently served by bmibaby and this would appear to be a not-so-subtle way of making bmibaby even less appealing to any purchaser. It may be worth noting that IAG (BA’s parent company) has a 14.5% shareholding in Flybe.