Venice Airport welcomes over 50 new services in 2012; Volotea leads way followed by Air One and easyJet The new airline Volotea’s first base in Venice will result in 16 international routes, such as to Bordeaux – its first French destination, and seven domestic Italian routes, of which the first one was to Palermo in Sicily. However, Air One is also setting up a base at the airport, launching both nine new routes and taking over domestic Alitalia operations.

Last year saw passenger numbers at Venice’s Marco Polo Airport (VCE) jump by 25% to just over 8.5 million, helping it to jump to fourth place among Italy’s busiest airport after Rome Fiumicino, Milan Malpensa and Milan Linate. However, this is rather misleading as nearby Venice Treviso Airport (TSF) had its runway closed for six months (June to November), resulting in traffic from that airport (mostly Ryanair and Wizz Air flights) being diverted. In the first two months of 2012, passenger numbers are up just under 4%. However, there are signs that Venice’s underlying traffic could significantly improve on the recent level of around seven million passengers, thanks in part to the launch of Volotea and the 23 routes it will be starting this summer. In total, anna.aero estimates that well over 50 new services will be introduced during the course of 2012, potentially keeping local cake bakers employed for months. 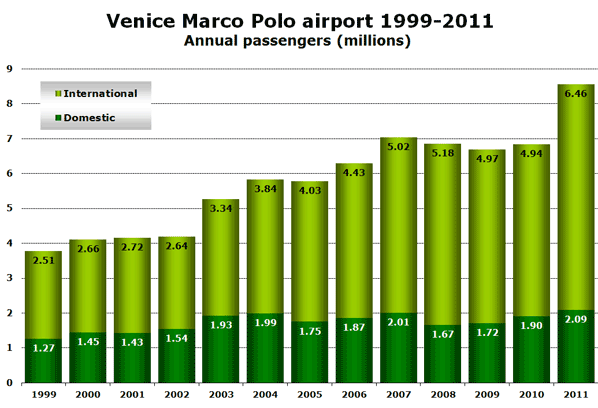 Volotea to launch 23 routes this year

The new Spanish-based 717-operating LCC Volotea is making Venice its biggest base this year with a total of 23 routes (it was 24 but it appears to have decided not to serve Budapest after all). Apart from domestic flights to seven destinations, the carrier is launching a further 16 new international routes; seven to Greece, five to Spain, and four more in four further countries.

In addition to the 23 routes being started by Volotea, Venice Airport will welcome over 30 further new services in 2012. Since the start of the summer season at the end of March, some 13 new services have already been launched by Air France (to Marseille, Nice and Toulouse), easyJet (to Geneva, Lisbon, Nice and Toulouse), Lufthansa (to Hamburg), Monarch (to Birmingham, London Gatwick and Manchester), and Vueling (to Nantes).

Apart from the Volotea base (which launched at the beginning of April), the big news is the decision by Alitalia to make Venice a base for its self-proclaimed ‘smart’ carrier Air One. Apart from the airline’s nine new routes listed in the table above, the carrier is also taking over Alitalia’s domestic services to Brindisi, Cagliari and Palermo from the end of this week.

Venice’s long haul flights comprise three transatlantic connections and two routes to Middle East hubs. Delta serves Venice from both Atlanta and New York JFK, while US Airways has daily flights from Philadelphia. During the last year, Emirates increased frequencies on its Dubai service to double-daily while Qatar Airways serves Doha daily. Air Transat also has weekly flights in the summer to Montreal and Toronto.