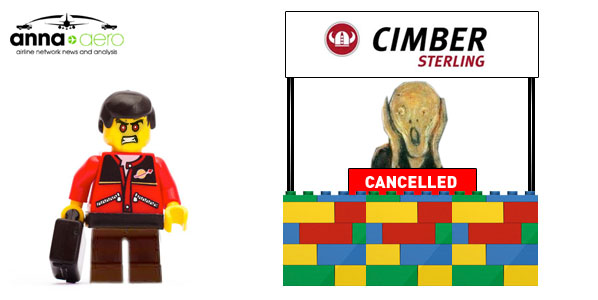 Airlines have been quick to snap up selected routes: DAT, Norwegian and Sun-Air were quick to launch flights and Skyways is following suit, but Flybe Nordic is still working on its plan to enter the Danish domestic market.

After the announcement Thursday morning that Denmark’s regional/low-cost hybrid airline Cimber Sterling has filed for bankruptcy, other airlines are quickly moving in to fill the void on selected routes.

At the end of this summer season, struggling Cimber Sterling was planning to suspend its low-cost operations and divest its 737s, which were a result of the purchase of parts of the bankrupt Sterling Airways in 2008. Instead, the airline was set to streamline its regional operations (using its fleet of CRJ200s, ATR42s and ATR72s) alongside its Swedish sister airline Skyways, wholly owned by Cypriot/Ukrainian Mansvell Enterprises (which also is the majority shareholder of Cimber Sterling).

27 routes were being operated

According to OAG data at the time of the airline’s bankruptcy, Cimber Sterling was operating a total of 27 routes of which 19 were from its main base at Copenhagen. The busiest routes (in terms of weekly departures) were also its only six domestic routes, all from the country capital Copenhagen, to Aalborg, Aarhus, Billund, Bornholm, Karup and Sønderborg. These services accounted for 60% of the airline’s total flights, and 55% of its weekly seat capacity. Cimber Sterling was the only carrier on four of these routes. 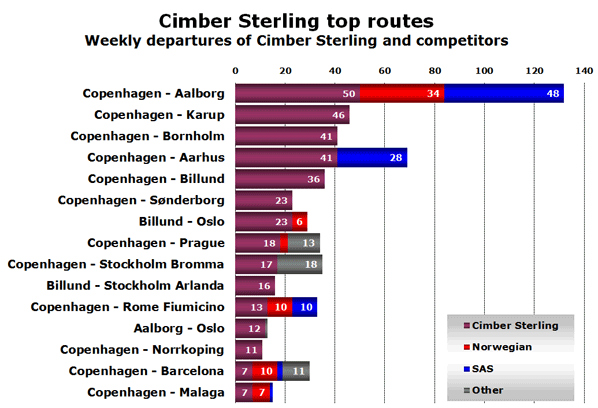 Cimber Sterling served 15 routes with at least daily flights. Both Norwegian and SAS provided competition on some of the routes while Czech Airlines (on Copenhagen-Prague), Flybe (on Copenhagen-Stockholm Bromma) and Vueling (Copenhagen-Barcelona) were also competitors on some of the airline’s main international services. From Copenhagen, the international destinations served (apart from those listed in the above graph) were Antalya, Catania, Chania, Naples, Nice, Palma de Mallorca, and Växjo.

Within hours, other airlines have been quick to announce their entry on selected routes. Danish Air Transport (DAT) instantly commenced operations on two domestic routes the same day as Cimber Sterling ceased operating (Copenhagen to Sønderborg and Bornholm), while British Airways’ franchisee Sun-Air of Scandinavia launched three international routes to Stockholm and Oslo within days (detailed in the table below).

Norwegian has also announced its return to the route between the Danish capital and Karup, starting Sunday 6 May, as reported by the Danish aviation news source check-in.dk. The low-cost airline also intends to increase frequencies on its routes to Barcelona, Rome Fiumicino, Malaga, Palma de Mallorca, Nice, Pisa and Prague as it bases two additional 737-800s in the Danish capital.

Cimber Sterling’s Swedish sister airline Skyways began operating the route to Sweden’s Norrköping on Monday 7 May, and is planning to compete indirectly with Sun-Air from 21 May, launching operations between Billund and Stockholm Arlanda.

At the moment, that leaves only one Danish airport without domestic flights; Billund. However, developments are fast and Flybe Nordic has reportedly also indicated intentions to announce domestic Danish routes imminently.