GoAir’s latest destination is Chennai, here seen launched at a press conference by the airline’s CEO Giorgio De Roni, which with three new routes already places the airport as the low-cost carrier’s sixth-busiest destination. In spite of being able to expand internationally, GoAir remains a domestic airline growing at a more moderate pace than its competitors.

Compared to its rather higher profile rivals Kingfisher and SpiceJet, Mumbai-based GoAir (part of Wadia Group) has taken a more low-key approach to developing its business in the Indian air transport market. Flights were launched back in November 2005, but the airline still has a relatively modest fleet of 12 180-seat A320s (although it has over 70 more on order). In March, GoAir’s share of the Indian domestic market reached 7.5% as the airline overtook Kingfisher (6.4%) and JetLite (7.3%) for the first time to move into fifth place in the Indian market. Last week saw the airline launch flights from Chennai, the 22nd airport it now serves in India. 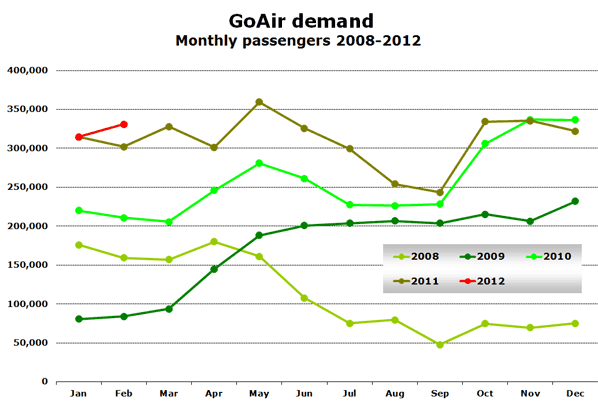 Last year, the airline carried 3.72 million passengers at an average annual load factor of 77.7%. This represents passenger growth of almost 21% over 2010 while load factors remained between 77% and 78% for the third year in a row.

Delhi and Mumbai are biggest hubs

In terms of the airline’s busiest airports, Delhi and Mumbai dominate with over 150 weekly departures. GoAir operates 14 routes from Delhi and 11 from Mumbai, with between seven and eight daily flights between the two airports. 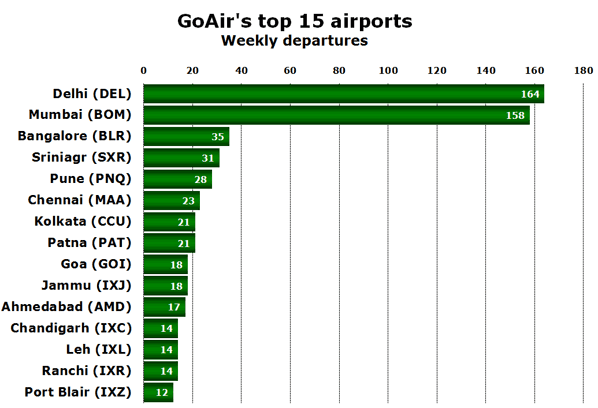 What about international flights?

Under Indian regulations, an airline can only start international services once it has been operating domestically for five years. GoAir passed this milestone in November 2010, but 18 months later has shown no inclination to enter the international market as it seeks to take advantage of the difficulties being faced by some of its rivals in the domestic market.