Rotterdam The Hague Airport growing fast in Q1 thanks to Transavia.com; Lufthansa to launch Munich flights from October 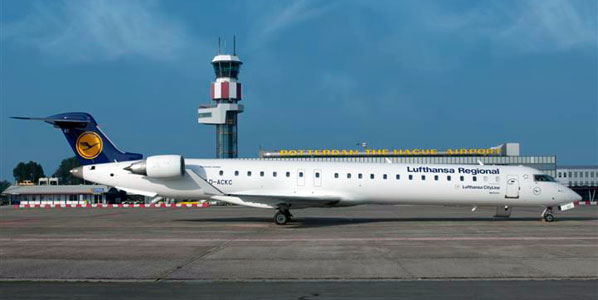 Rotterdam The Hague Airport is dominated by Transavia.com, but the airport serving both the port city of Rotterdam and the Dutch capital The Hague also has business-oriented routes on CityJet to London City and, from 1 October, with Lufthansa to Munich.

Rotterdam The Hague Airport is located less than 50 kilometres from Amsterdam’s Schiphol Airport, but is better placed to serve both Rotterdam and the home of the Dutch government and parliament, The Hague. Last year, passenger numbers grew by almost 16% to 1.16 million, just shy of the airport’s record of 1.20 million achieved in 2004 when KLM’s low-cost subsidiary Transavia.com established a significant presence at the airport. 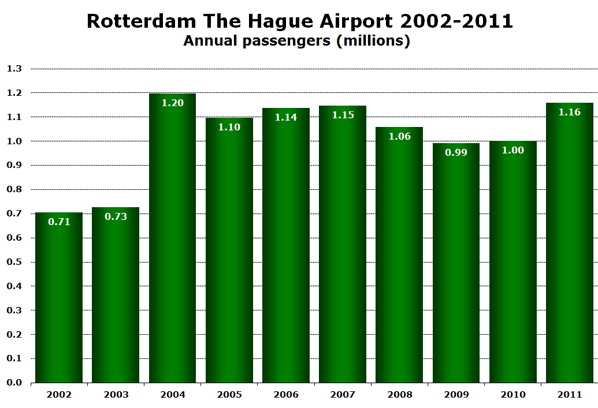 So far in 2012, passenger numbers are up over 20% thanks to Transavia.com’s growth which was driven by new year-round routes to Madrid, Milan, Prague and Vienna which launched last summer. This can be seen in the monthly traffic statistics for the airport which also highlights the seasonal nature of demand. 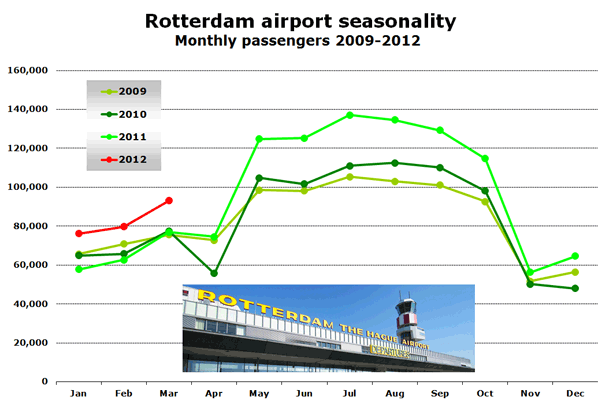 Transavia.com, which is a low-cost subsidiary of the Air France-KLM group, currently offers non-stop flights to 25 destinations across Europe. Last summer, it launched flights to Biarritz, Madrid, Milan Malpensa, Montpellier, Prague, Toulon and Vienna. This July sees Split in Croatia join the list of destinations served. 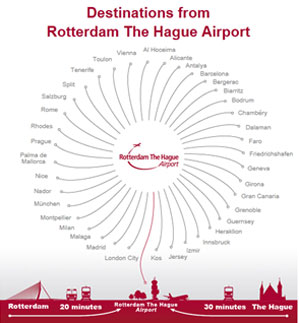 While the airport is dominated by Transavia.com’s low-cost point-to-point services, there are also scheduled flights to London City Airport with CityJet operating on behalf of Air France. For most of the year, there are eight daily flights on weekdays and just one on Saturdays and Sundays. According to UK CAA data, the service transported almost 124,000 passengers last year; up 7% on 2010.

From the beginning of October, Lufthansa will be offering twice-daily flights to its Munich hub using CRJ900s. The only other LCC to have served Rotterdam is Iceland Express which operated weekly flights to Keflavik in the summer of 2010. Another short-lived scheduled service was provided by OLT in the first half of 2011 when it flew nine-times weekly from Hamburg, initially with an ATR 42.