1,022 routes por favor: The massive listing from Aena’s 42 Spanish airports takes the number of vacant air services being advertised in anna.aero’s Route Shop to an inventory of 2,954 routes by 217 airports.

Every Aena airport – 42 across mainland Spain, the islands, and North African territories – now has a listing in anna.aero’s Route Shop, bringing 1,022 Spanish routes to the online route superstore.

The listings include vacant routes from the mega cities of Madrid (which advertises 30 routes) and Barcelona (45 routes), as well as Spain’s front line tourism destinations – Lanzarote (29 routes), Malaga (17 routes) and Alicante (45 routes) – while Aena’s many regional airports list exactly the kind of services which have made Spain into a highly developed low cost carrier market – A Coruña (10 routes), Santander (9 routes), and even Melilla on the North African coast (6 routes). 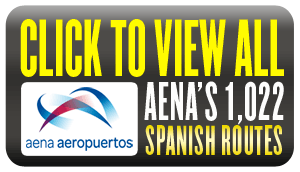 The huge Aena tranche takes the number of all air services being advertised to a total Route Shop inventory of 2,954 routes by 217 airports, although the backlog of 23 airports coming into the store – which includes Shanghai (16 vacant routes), Brisbane (10), Toulouse (33) and Cambridge (11) – will easily take this total significantly past the 3,000 barrier.