Icelandair last week launched flights to Denver in Colorado, the airline’s ninth destination in North America (after Boston, Minneapolis/St. Paul, New York City, Orlando, Seattle and Washington in the US, and Halifax and Toronto in Canada). anna.aero was present at the launch of both flights to and from Denver and took the opportunity to chat briefly with the airline’s CEO Birkir Holm Gudnason. 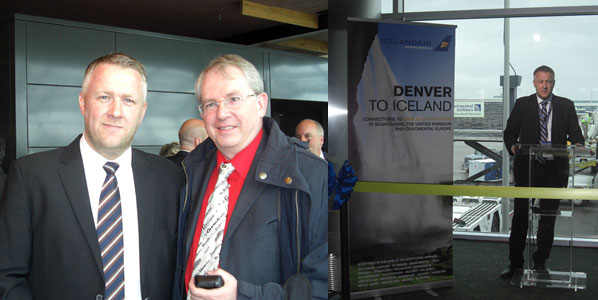 anna.aero's Editor Ralph Anker grabs a few moments with Icelandair's CEO Birkir Holm Gudnason at Keflavik Airport, before the airline's first flight to Denver last Thursday. In Denver, Gudnason revealed that no other airport/city had ever put in so much effort to ensure the success of a new Icelandair service.

anna.aero: Your new four-times weekly service to Denver sees the aircraft parked overnight in Denver. Why is that?

Gudnason: There are a couple of reasons. The Denver route is one of three routes we operate that is over 5,500 kilometres (the others are Orlando and Seattle) and this means if we flew the aircraft straight back it would not arrive during one of our two connecting ‘waves’ in Keflavik. By leaving the aircraft parked overnight, as we do in Orlando and Seattle, we can save on crew costs and get the aircraft to arrive back in time for the morning ‘wave’ to connect with our European outbound flights. Also, with our fleet of 757s, the fixed costs are relatively low, so parking them on the ground is not such a big issue for us.

anna.aero: You basically have a single fleet type of 757s, but these are no longer manufactured. What are your future fleet plans?

Gudnason: The 757 suits our network very well. This summer we will have a total of 16 757s serving our network, two more than last year. All the aircraft have been refurbished in recent years with leather seats and personal in-flight entertainment systems. Given the relatively long average sector length that we operate, that results in less stress on the airframe. We believe the 757s still have many years of useful service ahead of them.

anna.aero: What other plans do you have for your route network?

Gudnason: Apart from launching flights to Denver this summer, we are also increasing frequency on a number of our other routes to Europe and North America. This summer, we will be offering more seats to more destinations that ever before in the airline’s history, and around 14% more than in 2011, which should result in us carrying around two million passengers. We recently announced that in addition to our two daily flights to London Heathrow, we will be starting twice-weekly flights to London Gatwick starting in mid-October. We are also evaluating a number of other routes for 2013.