More than a third of all just launched or soon to be launched routes from Canadian airports involve WestJet. The airline is strengthening its transborder and international networks, focusing on Canada’s busiest airports: Toronto Pearson and Vancouver.

First quarter passenger figures for Canada’s 10 busiest airports reveal that demand is up 5.4% representing a healthy start to the year. All of the airports have recorded growth compared with the first quarter of 2011 (helped of course by an extra day in February this year) though none have seen passenger demand grow by more than 10%. Edmonton with growth of 8.1% between January and March, just edges out Winnipeg (+7.9%) and Ottawa (+7.8%) as the fastest-growing major airport in Canada so far this year. 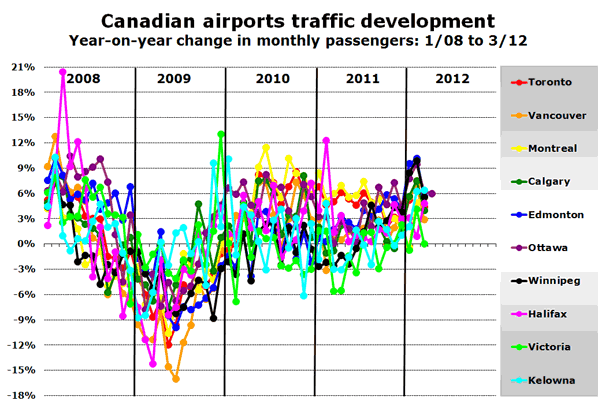 Canada’s two busiest airports, Toronto Pearson and Vancouver, have both reported first quarter growth of between 5% and 6%.

The eight busiest Canadian airports all break down their traffic figures into domestic, transborder (US) and international (non-US). A graph of 2012 year-to-date ‘growth’ for each airport by region reveals that domestic traffic is up at all eight airports, by between 2.3% (Halifax) and 9.8% (Winnipeg). 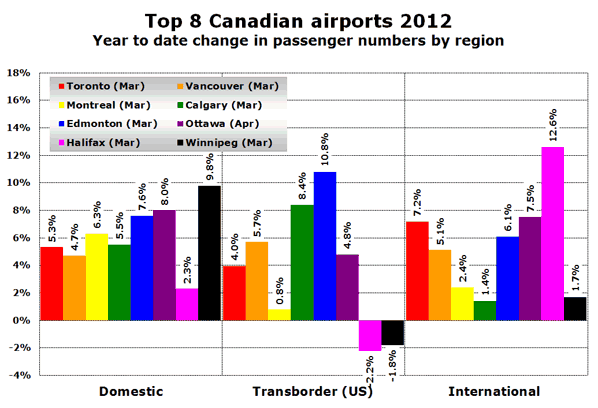 The US market has seen growth at all airports except Halifax and Winnipeg, with Edmonton leading the way (+10.8%), but Calgary and Vancouver also seeing this market segment grow by more than 5%. All eight leading airports have seen growth in (non-US) international traffic so far in 2012, with Halifax leading the way with passenger numbers up 12.6%.

Based on scheduled seat capacity for May, Toronto City airport is now the ninth busiest airport in the country, and closing fast on Halifax and Winnipeg thanks to Porter Airlines’ continued growth at the convenient, downtown airport, as well as the return of Air Canada serving the Montreal market.

The following new services have either already started or will be launching soon from Canada’s main airports: