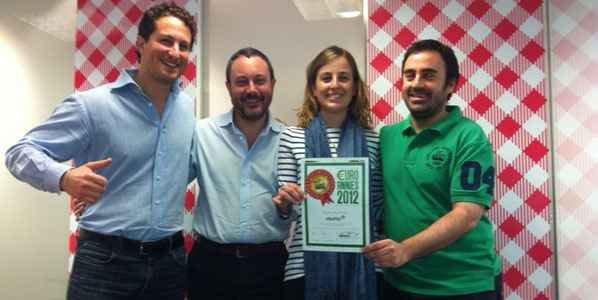 It might not come as a major surprise that Volotea, which already has launched 13 routes and plans to launch a further 59 (!) by August, wins this prize. The much-publicised airline is expanding rapidly for a start-up, finding niche routes for which the airline’s 125-seat 717s are suited. anna.aero’s calculations of the airline’s schedule in August (the airline does not yet report to schedule data suppliers) shows that its offered capacity for the summer peak month, approximately 200,000 seats, is more than five times larger than that of the second-biggest start-up in the European market; the Icelandic virtual low-cost airline WOW air that is due to commence operations on 1 June.

Airline with the most new routes
Ryanair

No major surprise here either, as Ryanair takes this prize for the third year in a row. And the number of routes is not unimpressive; 147 new routes. Remember that this is the net increase, meaning that dropped routes already have been discounted. The ultra low cost airline will in fact operate 308 routes in August that it did not serve in the same month last year; however, 161 routes that operated last August will also have been dropped.

Before anyone accuses Ryanair of moving in and out of airports, it should be highlighted that the figures of added and dropped routes should be taken with a pinch of salt. Some of the developments have operational explanations, such as the move from Berlin Schönefeld to Berlin Brandenburg (schedules for August still show the move as happening this summer, even though it has just been confirmed that the move will take place in March 2013) and the closure last summer of Venice Treviso. The effect of the latter move is that Ryanair’s 28 temporary routes at Venice Marco Polo of last summer will have been replaced by 29 routes at Treviso after Ryanair’s return to the secondary airport this year.

Meanwhile, the runner-up is this category is Volotea with 72 obviously all new routes planned to operate in August. The new routes are mostly, but not exclusively, spread between the airline’s bases at Venice in Italy, Nantes in France and Ibiza in Spain.

Flag carrier with the most new routes
Lufthansa and Air France

Following Ryanair and Volotea are easyJet (47), airberlin (47), Jetairfly (36) and Vueling (36) before United Airlines’ European growth; however, this legacy carrier’s route increase is artificial due to its merger with Continental and therefore excluded. The joint winners are consequently the German and French flag carriers with a net increase of 29 routes. Rather annoyingly for the two rivals, Lufthansa and Air France have grown their networks at equal speed in the last year.

In spite of Lufthansa’s withdrawal from Milan by shutting down Lufthansa Italia, the airline jointly wins this category with Air France through its expansion in Berlin. Although intended to take place at Berlin Brandenburg, it is now known that the 32 new routes will be operating at Berlin Tegel in August when the data is analysed for. It should be noted that some of these routes are taken over from germanwings, while Lufthansa’s dropped routes in Stuttgart have been handed over to the low-cost subsidiary. Four new routes have also been generated by Lufthansa choosing to spread its Moscow operations, launching flights to Moscow Vnukovo.

For Air France, a great number of the new routes come from the airline’s expansion in the French regions; particularly at the new bases in Marseille (net increase: 16; 17 launched, one dropped), Toulouse (11; 15 launched, four dropped) and Nice (four new routes).

The runner-up in this category is Turkish Airlines, which has increased its network by 25 routes since last summer.

To see which airports have won EURO ANNIE prizes, see the Airport Awards.