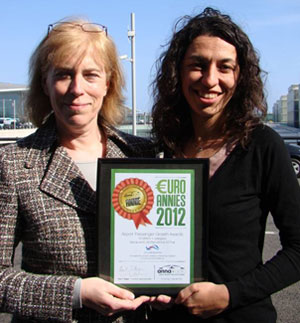 As anna.aero already monitors monthly passenger traffic for more than 300 European airports, it is an easy task for us to see which airports had the highest passenger traffic growth in 2011 over its 2010 figures. Europe’s airports have been split into six categories depending on their annual passenger turnover, resulting in six winners (and six runners-up).

Barcelona takes the prize for being the fastest-growing big airport in Europe last year. At almost 18% growth during a recession, the airport’s achievement is remarkable for an airport of that size. In 2011, Barcelona had 34.4 million passengers compared with 29.2 million in 2010; an increase of 5.2 million in real terms. Ryanair stands for the biggest expansion, having launched its base in September 2010 and expanded its operations in 2011. Moscow Sheremetyevo meanwhile climbed from 19.1m to 22.4m passengers.

Venice Marco Polo largely wins in the 5-10m category because of the temporary closure of Venice Treviso, which saw the smaller airport’s operations move over to the city’s main airport. However, the airport is already this year attracting a number of new airlines, for example with both Volotea and Air One setting up bases, meaning that this year’s growth makes it possible that last year’s growth will not only be a temporary inflation of passenger numbers. The runner-up in this category, Basel, mostly benefits from its largest carrier easyJet having grown by almost 20%.

Airport with the Most New Airlines

Pula Airport on the Istrian Peninsula in Croatia will have five more airlines serving the airport in August this year than it did last August, of which two notably are from Russia; S7, Rossiya, Lufthansa, Jat Airways and Jet2.com. Lufthansa’s services only began last week and are detailed in this week’s new route report.

Venice Treviso Airport has been excluded from this prize because of its ‘new’ airlines actually being airlines returning after the airport’s closure.

An entire seven airports share the runner-up position, having increased its number of airlines by four. Lviv in the Ukraine is the only of these not to have lost any airport customers in the same time frame, while the other six have attracted even more new airlines, but also lost customers. Notable losses through bankruptcy have been Spanair (Malta and Menorca), Malev (Prague) and Cimber Sterling (Prague).

Airport with the Most New Routes 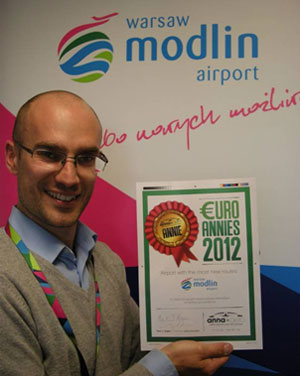 Celebrating the joint win with Istanbul Atatürk is Warsaw Modlin Airport’s Chief Specialist Aviation Sales, Piotr Lenarczyk. With a brand-new airport, no wonder the routes operated at Modlin this August will be new. Our analysis shows that the airport will be connected non-stop with 24 other airports during the summer peak month.

This category has two joint winners; the brand-new low-cost airport serving the Polish capital, Warsaw Modlin, as well as the Turkish capital’s larger of two airports, Istanbul Atatürk. In the case of Modlin, it will have only two airline customers – Wizz Air and Ryanair – but all of the two airlines’ routes will of course be new to the brand-new airport, giving the airport a route network of 24 routes in August. This is the same net increase as recorded at Istanbul Atatürk, ranging from multiple daily flights to Moscow Vnukovo, Tripoli, Mardin, London Gatwick and Benghazi to lower-frequency routes such as to Aalborg, Novosibirsk and Yanbu.

Palma de Mallorca’s runner-up position is largely caused by Ryanair’s base at the airport, but also the start-up Volotea’s expansion.

Airport with the Most New Non-European Routes

This prize measures the number of intercontinental routes gained at European airports. Istanbul Atatürk wins again, having mostly secured medium-haul routes. Among the net gain of 13 routes, the highest frequency services are to Tripoli, Benghazi and Misrata in Libya. Notable longer haul destinations are New York Newark and Accra in Ghana.

The runner-up Düsseldorf, which has a net gain of six intercontinental routes, mostly benefits from airberlin’s expansion. Although the airline has lost Bangkok flights, it now has a twice-daily connection with Abu Dhabi, airberlin’s partner Etihad’s hub, instead, and as recently as last week, airberlin launched flights to Las Vegas.

This award, famously of interest to plane-spotters, recognises the airports that have the widest airline customer base. Rome Fiumicino and last year’s winner Paris Charles de Gaulle share the first place with 97 airlines serving each of the two airports. It is interesting to note that Rome Fiumicino last year was in third place, meaning that the airport has overtaken Frankfurt – in spite of the German airport’s new runway – to reach Paris CDG’s level.

To see which airlines have won EURO ANNIE prizes, see the Airline Awards.