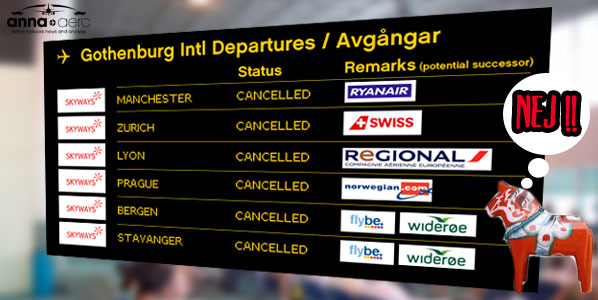 During its last week of operations, Skyways served 21 routes; 13 Swedish domestic and eight international. Its latest new route, Stockholm-Billund, only began the day before bankruptcy.

At the time of the bankruptcy, the airline operated 11 Fokker 50 aircraft and, through its Gothenburg-based subsidiary previously branded as City Airline, six ERJ145s and two ERJ135s (source: ch-aviation.ch).

During its last week of operations, Skyways served 21 routes; 13 Swedish domestic and eight international (from Norrköping and Karlstad to Copenhagen and from Gothenburg to Manchester, Zurich, Lyon, Prague, Bergen and Stavanger). Of the domestic routes, the airline operated to Halmstad and Visby from both Stockholm Arlanda and Stockholm Bromma, making the number of unique city pairs served last week 19.

The chart below details Skyways’ top 15 routes by frequencies last week and the competition the airline faced. 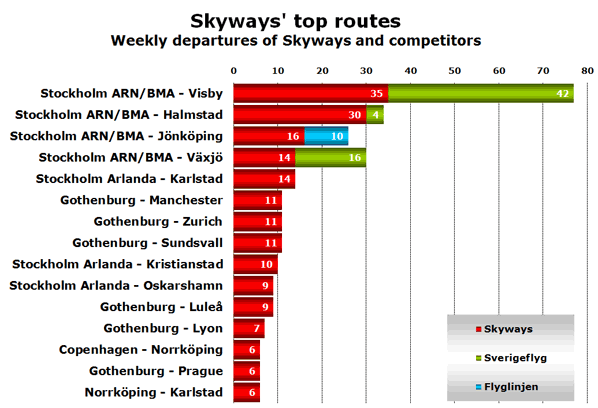 The day before the airline filed for bankruptcy, on 21 May, Skyways also launched a route previously operated by Cimber Sterling – from Stockholm Arlanda to Billund in Denmark – a route that in the end was operated for a single day only. Sun-Air of Scandinavia does, however, operate a competing route between Billund and Stockholm Bromma.

With the exception of this route, none of Skyways’ international operations faced competition and are therefore now left unserved.

The main beneficiary of Skyways’ bankruptcy is the group of regional airlines jointly branded as Sverigeflyg, which has announced that it is increasing frequencies on its routes from Stockholm to Visby, Halmstad and Växjö.

The Jetstream 32 operator Direktflyg has immediately taken up the route between Oskarshamn and Stockholm Arlanda and will launch 10 weekly flights between Gothenburg and Sundsvall on 4 June, while the local regional airline Flyglinjen in Jönköping has announced that it will complement its 10 weekly services to Stockholm Bromma with 15 flights a week to Stockholm Arlanda from Thursday 24 May.

Flybe Nordic, which after Cimber Sterling’s bankruptcy expressed interest in entering the Danish domestic market, has yet to make an announcement for expansion in either Sweden or Denmark as a result of the two bankruptcies.