Last week, Bismarck in North Dakota got a new service with Frontier from the low-cost airline’s main base in Denver. Colorado’s biggest airport is also attracting long-haul services on Icelandair and next to Tokyo on United’s 787s. Meanwhile, Frontier is also expanding at the smaller airport in Colorado Springs.

Denver’s “new” airport, some 40 kilometres north-east of downtown, is now 17 years old and handled a record 53 million passengers in 2011, helping it to retain its position as the fifth busiest passenger airport in the US (after Atlanta, Chicago O’Hare, Los Angeles and Dallas/Fort Worth) but dropping to 11th globally due to the faster growth in 2011 of Hong Kong Airport. Denver International Airport dominates the air transport scene in the US state of Colorado, which is possibly best known as the gateway to the Rockies, a popular destination for US winter sports enthusiasts. 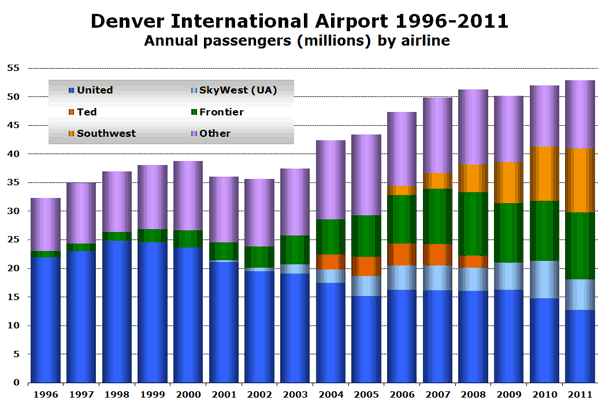 The graph of annual passenger traffic broken down by airline highlights how in recent years growth has been driven by the arrival of Southwest in 2006, and how United’s share of the market has declined. When the new airport opened in 1996, United’s share of demand was almost 70%, but traffic figures for last December show that the airline’s share has fallen to around 41%, while Frontier has seen Southwest grow rapidly and according to the airport’s statistics for 2012, Southwest passed Frontier for second place in January.

Apart from its own aircraft and those of major capacity provider SkyWest, United also used Atlantic Southeast, ExpressJet, GoJet and Shuttle America to provide capacity for its marketed flights in Denver in 2011. These four airlines carried a further 2.9 million passengers on United flights last year, but are included under “Other” in the above table.

Based on the number of weekly departures in May, the best served destinations from Denver are Salt Lake City, Phoenix, Los Angeles and Las Vegas, all of which have more than 20 daily flights. United serves all 12 of the top 12 markets while Frontier competes on 11 of them (Chicago O’Hare being the exception and even here Frontier serves Chicago Midway instead) and Southwest on nine of them, and, like Frontier, it also serves Chicago Midway rather than O’Hare. 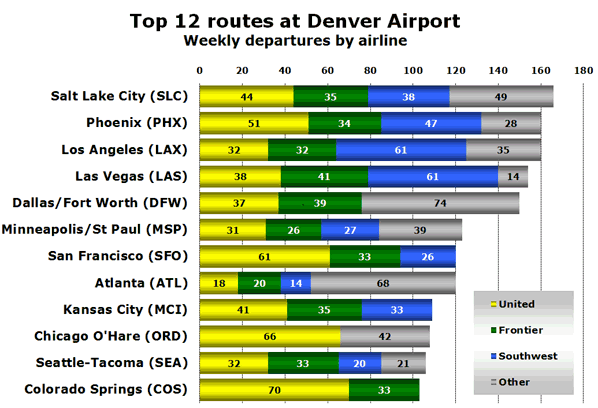 In the nine markets in the above table where Frontier and Southwest compete head-to-head, US DOT fare data for Q4 2011 does not reveal the answer in two markets, but in the remaining seven, Frontier is cheaper on average than Southwest in six of them, the exception being Las Vegas. In a further nine markets from Denver for which fare is available for both Frontier and Southwest, Frontier has the lower average fare in eight of them, with Frontier fares on average being around 6% cheaper than those of Southwest.

According to US RITA BTS data, the leading routes in terms of passenger numbers for the period March 2011 to February 2012 are Los Angeles, Phoenix and Las Vegas, with Salt Lake City ranked just ninth as a result of Delta and United using mostly regional jets on this particular route.

United to link Denver to Tokyo with 787s starting next March

A summary of the new services launched by carriers from Denver International Airport between January 2011 and May 2012 is provided in the table below.

The recent launch of flights to Iceland with Icelandair is only the airport’s third non-stop service to Europe, following in the footsteps of British Airways to London Heathrow and Lufthansa to Frankfurt.

Other new routes starting from June onwards include AirTran to Akron, Dayton and New York LaGuardia; Delta to New York LaGuardia; Frontier to Punta Cana; and United to Fairbanks. United also revealed this week that it plans to start non-stop flights from Denver to Tokyo Narita from the end of March 2013 using its new 787s, a much needed non-stop service to Asia.

13 other airports in Colorado with scheduled services

While Denver is the dominant airport in Colorado, OAG schedule data for May reveals a further 13 airports with scheduled services. These are dominated by Colorado Springs from which Frontier launched four new routes this week to Los Angeles, Phoenix, Portland and Seattle-Tacoma. The airport is around a 90-minute drive south of downtown Denver. 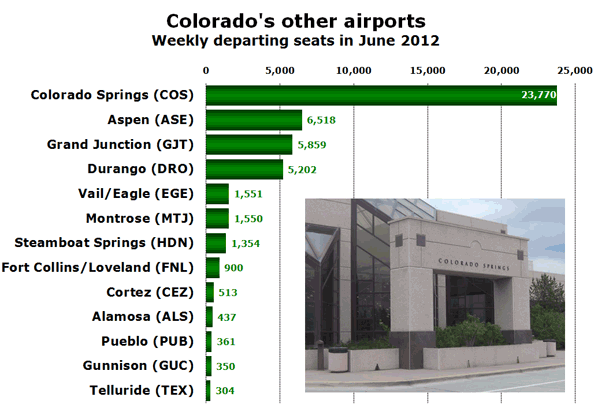 Some of these airports are actually far busier during the winter months when they serve as more convenient gateways than Denver to specific ski resorts. In particular Aspen and Vail/Eagle airports have significantly more services during the winter season. 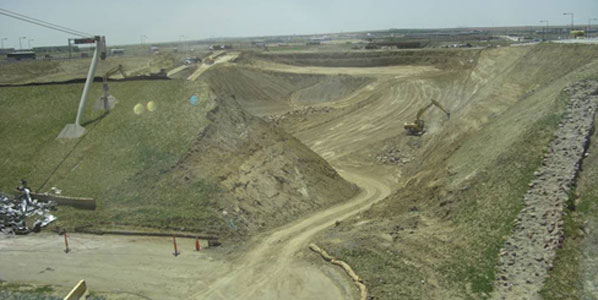 This may look like just a big hole in the ground but this is actually the beginning of the South Terminal Redevelopment Program which will include a 500-room Westin Hotel and conference centre, a commuter rail station that will link to downtown Denver and improvements to the existing concourse baggage and train systems. The rail link is scheduled to open in 2016 and the hotel in 2015.